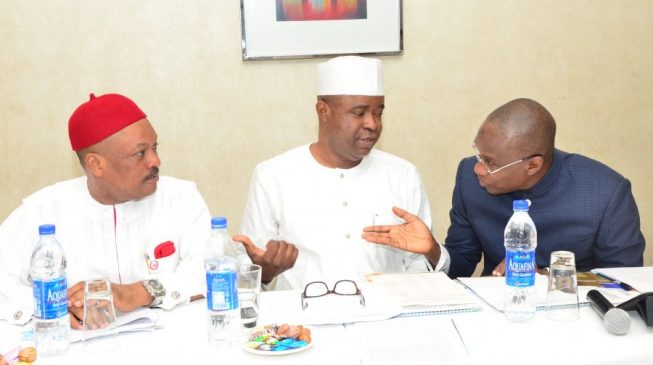 The senate committee on banking, insurance and other financial institutions says the Assets Management Corporation of Nigeria (AMCON) should compile and publish the names of debtors.

Speaking on Thursday at the opening of a 2-day retreat at Intercontinental Hotel in Lagos, Rafiu Adebayo Ibrahim, chairman of the committee, said this allows Nigerians know the people holding the economy to ransom.

The senator said these people account for 80% of AMCON’s N4.8 trillion.

He proposed that AMCON partner with the ministry of finance, Central Bank of Nigeria and the office of the attorney general of the federation so the president issues an executive order on seizing assets of debtors.

Ibrahim said the senate will amend the AMCON act so it has legislative support to achieve its aim.

In his presentation, Ahmed Kuru, AMCON CEO, said it is doubtful that the federal government can afford to cover AMCON’s debt in the short term.

“One of the major areas for amendment is the matter of vesting proprietary interest of all collateral assets acquired by AMCON from commercial banks,” he said.

“Our second challenge has to do with the disposal of assets due to the economic downturn. AMCON’s current assets under management (AUM), that is assets obtained from debt resolution, has a book value of N182 billion, which we are unable to sell.

“Our ability to successfully divest these assets, at competitive market price, is severely hampered by several factors including valuation methodology, unperfected title documents, state of the economy, purchasing power.”

Kuru said AMCON has in the past seven years exhausted the low hanging fruits and have had to roll up sleeves for a drawn out battle because it has become harder to get obligors to settle their debts.