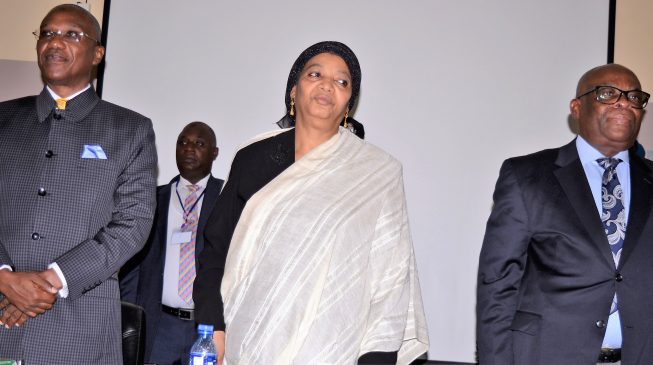 “I will encourage the use of ADR, as part of the mechanism put in place to resolve asset management related disputes in our courts,” he said.

“Certainly, judicial time and capacity are scarce public resources; as such repeated delays constitute waste of these precious resources. A better understanding of the current trends in this area of the law will go a long way in curbing delays and waste of judicial time and resources, thereby helping AMCON in fulfilling its mandate.

“The judiciary will continue to do its best to ensure judges remain conversant with the AMCON regime towards engendering efficiency, uniformity and improvement in the quality of judicial services in our courts.”

“In fact, the Hon. Chief Justice of Nigeria has consistently encouraged the utility of ADR viewing the delays in adjudication caused by the density of cases in the dockets of the trial and appellate courts.”

She further explained that, the “appellate courts trust that this form of interactions holds the key to fast tracking debt recovery by AMCON and the eventual industrialization of the Nigerian economy”.

“In the court of Appeal, I have since issued a circular directing the expeditious disposition of all AMCON appeals and I am aware that the circular is being effectively implemented,” Bulkachuwa added.

Ahmed Kuru, AMCON CEO, in his submission reminded the honourable justices that AMCON currently has a lot of cases that are pending at the Federal High Court because obligors of the corporation deliberately raise issues that would cause delay.

“AMCON currently has over 3,000 cases pending at the federal high court. Given the litigious tendency of our obligors, we anticipate that more than 50 per cent of the cases will proceed to the court of Appeal and eventually the Supreme Court.

“We hope that the special Practice Directions issued by the President of the Court of Appeal will be very instrumental to speedy determination of the eventual appeals.