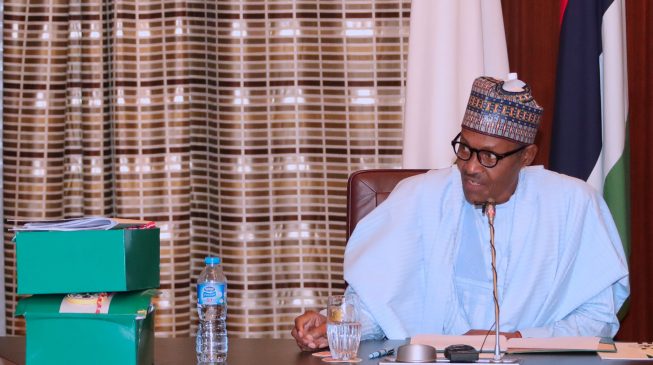 President Muhammadu Buhari is currently presiding over a special federal executive council (FEC) meeting aimed to finalise works on the 2019 budget.
Adebayo Shittu, communications, and Solomon Dalung, minister of sports and youth development, took the opening prayer.
The meeting is to exhaustively deliberate on the budget before transmitting it to the national assembly.
The council had in October approved the 2019-2021 medium term expenditure framework (MTEF) and fiscal strategy paper, and forwarded same to the national assembly for its consideration and approval.
Last month, Udoma Udoma, minister of budget and national planning, had announced that the federal government was considering a leaner 2019 budget of N8.6 trillion, which is leaner than the N9.1 trillion approved by lawmakers for 2018.
He explained at a consultative forum on the medium term expenditure framework (MTEF) and fiscal strategy paper (FSP) 2019-2021, that the decision was due to reduced government revenue projection for the year.
Udoma also said government planned to cut down the level of borrowing from N1.6 trillion in 2018 to N1.5 trillion in 2019, while the deficit component would be reduced from N1.9 trillion in 2018 to N1.6 trillion.
In spite of the recent oil output drop to about 1.9 million barrels a day, Udoma said government was optimistic, explaining that the 2.3 million barrels a day target was achievable with production rising to 2.15 million barrels a day and new oil productions being put into play.
Although a $50 per barrel oil price benchmark was proposed in the ERGP, the minister had expressed confidence that with a significant rise in the price above $80 per barrel currently, government has proposed a $60 per barrel oil price for the budget.
Udoma has added that N305 was proposed as exchange rate to the dollar, with government working to keep inflation down after slight increases in the last two months on the heels of 18 months consecutive decline.
On revenue, Udoma had said based on the oil price and oil production assumptions, government expected to generate about N3.6 trillion from oil, up by about N500 billion from last year’s figure.
About N6.9 trillion revenue is projected to be available to the budget in 2019.