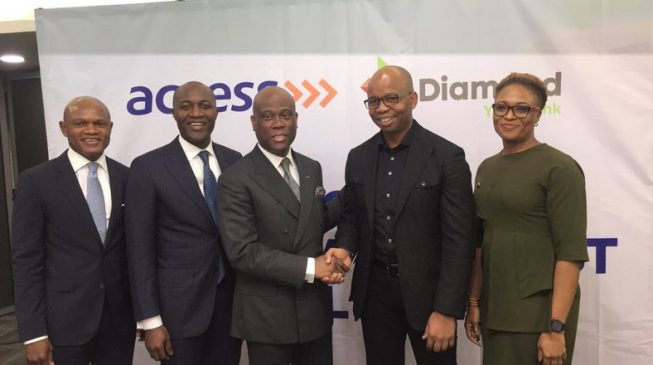 A shakeup of Nigeria’s banking industry leadership is in the works and Access Bank is again at the centre of the storm. The bank is frantically warming up for the number one position by the size of the balance sheet. Having travelled from the backyard to the frontline of Nigerian banking, Access Bank is jockeying for a higher height still.

The high jump from the third place on the industry ranking to the first by asset base will happen just overnight by its acquisition of Diamond Bank. The business combination is expected to give birth to an over N6 trillion naira bank – the largest banking institution in Nigeria.

Access Bank is already carrying the largest credit portfolio in the banking industry at about N2 trillion at the end of September 2018, beating FBN Holdings’ figure of N1.92 trillion. The leadership margin is set to widen sharply in no time. With a combined gross customer lending volume of close to N3 trillion, the emerging bank will account for close to a third of the total loans and advances of the top five banks in Nigeria at the moment.

There will be a major reinforcement of the equity cushion of the emerging bank from the present level of N473 billion of Access Bank to a post combination standing of close to N700 billion. This would be one of the top three largest equity resources in the Nigerian banking industry.

The earning capacity of the post acquisition bank appears equally headed for the top of the banking industry ranking. With a current revenue projection of N500 billion for Access Bank for the 2018 full year and a N190 billion projection for Diamond Bank, the emerging bank could build the largest revenue capacity at a period of tight revenue growth for banks.  Gross earnings projections for Zenith Bank and FBN Holdings for 2018 are N640 billion and N607 billion respectively. 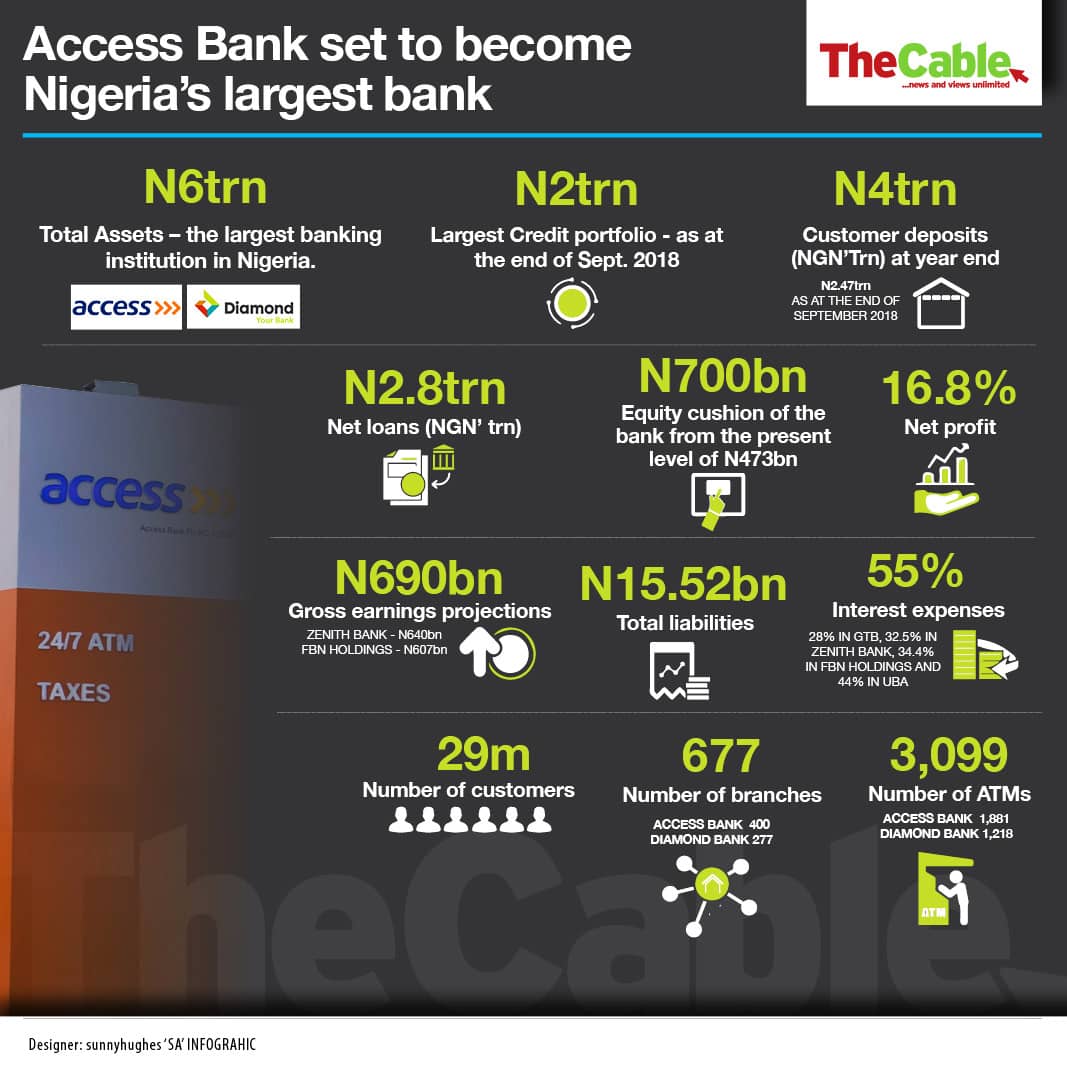 The high growth speed in the balance sheet and revenue numbers of the emerging bank will expectedly slow down when it comes to the bottom line performance at least in the short-term. The reason for this is the inability of Diamond Bank to convert its revenue into profit. Its marginal profit of N1.65 billion at the end of the third quarter looks very likely to disappear into a loss at full year, as loan loss expenses are likely to grow in the final quarter.

Access Bank ended the third quarter with after tax profit of about N63 billion, already slightly ahead of the full year figure in the preceding year. A likely increase in loan impairment expenses and weakness from Diamond Bank are expected to break the profit growth momentum of the post merger bank. On the banking industry’s profit ranking table, the post merger Access Bank is expected to stay ahead of FBN Holdings, stand in the same region with UBA but measure well below Zenith Bank and GTB.

Improving the relationship between assets and revenue and between revenue and profit will be the challenge for the management of the emerging Access Bank. In terms of converting assets into revenue, Access Bank is in line with the industry average asset turnover of 0.08 in 2018. Diamond Bank, with a higher than industry average ratio of 0.09, will add strength in terms of ability to turn assets into earnings.

When it comes to converting revenue into profit, the post merger Access Bank is likely to face a sharp deterioration of capacity. The industry leader on profit margin is GTB, which converted more than 42% of gross earnings into after tax profit at the end of the third quarter in September 2018. It is followed by Zenith Bank, which closed the same period with a net profit margin of 30.3%.

Access Bank’s net profit margin of 16.8% at the end of the third quarter will be diluted further with Diamond Bank’s modest margin of 1% that still has a big chance of turning into negative.  The challenge for the bank’s management is to drag along the earnings weakness of Diamond Bank with its diluting effect in the short-term to ascend to a new level of operating strength.

That challenge isn’t going to be quite an easy one, particularly in the season of operating difficulties that have circumscribed the banking business here. Diamond Bank has experienced declining profits since 2014 and closed the 2017 financial year in a loss. Credit loss expenses consumed over 37% of net interest income at the end of the third quarter and could rise further in the final quarter.

The post merger bank will have to contend with the liquidity pressure that sends Diamond Bank constantly to the inter-bank market for high cost funds. Customer deposits dropped by over N93 billion at the end of September 2018 from the closing figure last year. That accounted for a drop of 10.6% in total liabilities at the end of the period despite a 39% expansion in due to other banks to N15.52 billion. Over the same period, Access Bank grew customer deposits by N230 billion, providing the strength to recharge Diamond Bank’s weakening deposit portfolio.

Yet, on the basis of interest cost definition, Access Bank isn’t a low cost bank. It is even a relatively higher cost bank than Diamond Bank. Interest expenses consumed 55% of interest income in Access Bank at the end of the third quarter against 38% in Diamond Bank. The ratio is 28% in GTB, 32.5% in Zenith Bank, 34.4% in FBN Holdings and 44% in UBA.

This explains why GTB, with a lower interest income than Access Bank at the end of September at N237 billion compared to N274 billion, posted a higher net interest income of N171 billion than Access Bank’s N123 billion. GTB’s 12 million retail customers generate about one-half of deposits while about 800 wholesale and corporate clients account for over 70% of total credit and profit.

The sudden leap in retail branch network expected from the Access Bank’s acquisition is likely to help the emerging entity moderate the high cost of funds. This is however likely to happen to a limited extent, as Access Bank already has one of the largest branch networks in the banking industry. The cost profile reflects more of the market focus than retail network in an era of rapidly growing electronic branches and digital transactions.