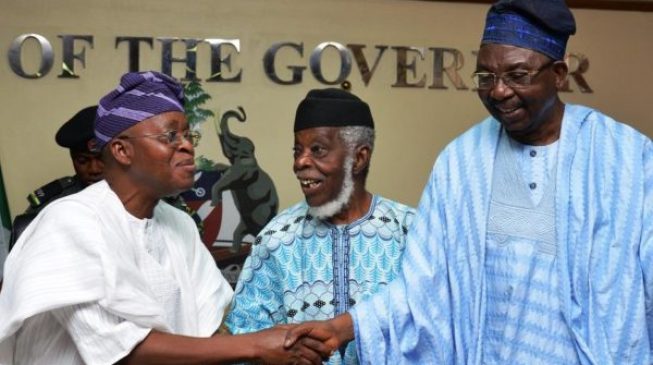 A faction of Afenifere, the apex socio-cultural Yoruba association, has endorsed President Muhammadu Buhari for the 2019 presidential election.
Biodun Akin-Fasae, spokesman of the faction, said this on Thursday while addressing journalists on the outcome of a delegates’ meeting in Ibadan, Oyo state capital.
The group said Buhari is “trying his best” with regards to developing what is left of the Nigerian economy and that “the best is yet to come”.
Akin-Fasae said: “We have decided to host the Yoruba land in Ibadan on January 29. It is to proclaim the support of the Yoruba for President Muhammadu Buhari in 2019 and to tell the world that the Afenifere that Baba Awolowo created before he left is still intact as a progressive movement.
“The economy is a collective issue. The economy has been bastardised for years. As at now, President Buhari is trying his best; he is bringing the economy up.
“The gross domestic product (GDP) is growing. Look at the programmes for youths and the children through empowerment and school feeding programmes in schools across the country; 26 states are already in the programme and many other states are happy with it.
“So, President Buhari is trying his best and the best is yet to come. That is why we are asking people to vote for him, particularly in this Yoruba land, in the 2019 presidential election.”
He insisted on the authenticity of the support, saying the group’s other faction isn’t Afenifere.
“The Afenifere that we know in Yoruba land is a progressive movement. This is where we are today in Ibadan. The other Afenifere (the Ayo Adebanjo group) that is talking about Abubakar Atiku are not part of us. They are usurpers,” he said.
“The Yoruba are not divided; there are not so many Afeniferes. Yoruba is a nation and even during the time of Baba Awolowo, there were dissent voices. So, we are not embarrassed.”