Amosun: I fear only God – not even Buhari 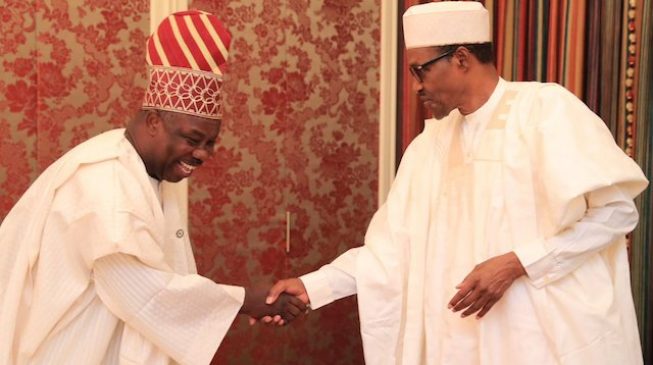 Ibikunle Amosun, governor of Ogun state, says he fears only God and not any human being, including President Muhammadu Buhari.
He said this while responding to reports quoting him as saying he fears the president.
The governor had been quoted to have said that he fears God and Buhari while addressing leaders and members of the All Progressives Congress (APC) at the party’s secretariat in Abeokuta shortly after the national working committee (NWC) inaugurated the state caretaker committee.
“To put the record straight, I never said I fear President Muhammadu Buhari. I only said I fear God. I don’t fear President Buhari,” Amosun said during the 2018 Christmas Carol and Service of Nine Lessons organised by the state government in Abeokuta, the state capital.
“You know this is our time as politician, a time when politicians will call black, blue. Yesterday I held a meeting with our people, and the way I started was that, I was brought up to fear God but only for me to see in the paper this morning that ‘Amosun says he fears God and Buhari.
“No, it is only God I fear, the one that is alive, the only one that will say ‘kufayakun’ and no one can change(it), that is the only God that I fear.
“Of course, I respect President Buhari, I love him and he loves me too but I know him he fears God because he is from God. He doesn’t beg for respect he commands and earns it. So it is only God that I fear.”