Arrest of Orji’s son has nothing to do with Atiku, says EFCC 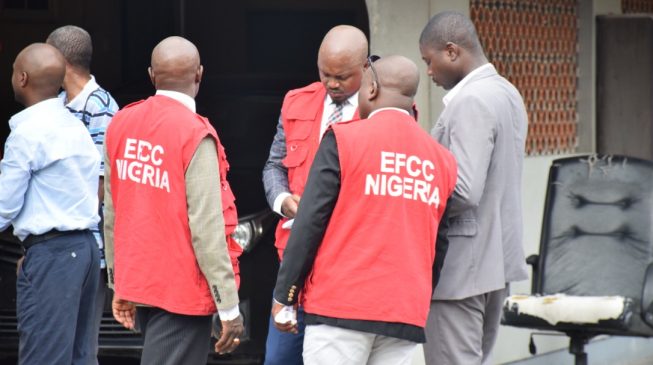 The Economic and Financial Crimes Commission (EFCC) says the arrest of Ogbonna, son of Theodore Orji, former governor of Abia state, has nothing to do with Atiku Abubakar, presidential candidate of the Peoples Democratic Party (PDP).
The Abuja apartment of Aliyu and Mustapha, sons of the presidential candidate were raided on Sunday but the anti-graft agency denied carrying out the action.
Paul Ibe, spokesman of Abubakar, had confirmed the incident, describing it as grievous. He said the officers were unable to find anything implicating.
In a statement on Monday, the commission said the son of the former governor was arrested over money laundering.
“We have received several calls and email messages asking us to confirm the arrest of the sons of the Presidential Candidate of the People’s Democratic Party, Alhaji Atiku Abubakar, as being alleged in some quarters. Some only said we raided the apartments of Atiku’s son’s looking for foreign currencies. This is nothing but another tales by moonlight,” the statement read.
“It is in the news that we have been investigating the former Abia governor, Senator Theodore Orji over alleged N27 Billion Naira money laundering. In the course of investigation, we discovered that he laundered part of the money through his sons. We have been on the trail of some of the purchases made by his son including the cars the boys allegedly bought.
“Last Friday, we traced one of the cars to a Nite Club in Abuja. In order not to cause panic, we waited until the business of the club was over and when the owner of the suspected car came to enter to take off, we arrested him and his friend who has a similar brand of car. That was about 5am on Saturday, December 8, 2018.
“The two boys we arrested were Ogbonna Orji, 32, and Kelvin Ilonah. While Orji’s Car, a Range Rover is valued at about N100 million, Ilonah’s car also a Range Rover, is valued at about N35 Million.”
The agency said due to findings during investigation, it stormed the residence of the suspects.
“In the course of further interrogation, the two boys led us to their apartment, three flats, and documents retrieved from the apartment showed it was rented for N13 million each per annum,” the agency said.
“Another brand new Prado Jeep, a 2017 model was recovered from the boys in the compound. The two boys in question gave useful information to the Commission which is helping in our further investigation.
“The EFCC, as a responsible organisation is abreast of the establishment mandate and we shall not deviate from such mandate.
“We never went after Atiku’s sons neither were Atiku’s sons among the two boys arrested. There is no link whatsoever to Atiku.”
EFCC also denied freezing the account of Peter Obi, vice-presidential candidate of the PDP.
“Only last week, the Peoples Democratic Party (PDP) was alleged to have raised alarm that the Commission blocked and or freeze the accounts of the Vice Presidential candidate of the PDD, Peter Obi,” the statement read.
“Again, this was another lie which we immediately punctured as there was no truth in it whatsoever, to the accusation. Till now, only silence has prevailed from the camp of the accusers.”
Critics of the government had accused the federal government of attempting to cow the opposition ahead of the 2019 elections.
When he returned to Nigeria after holding a “strategic meeting” in Dubai, the Department of State Services (DSS) searched the jet which brought the presidential candidate back into the country.