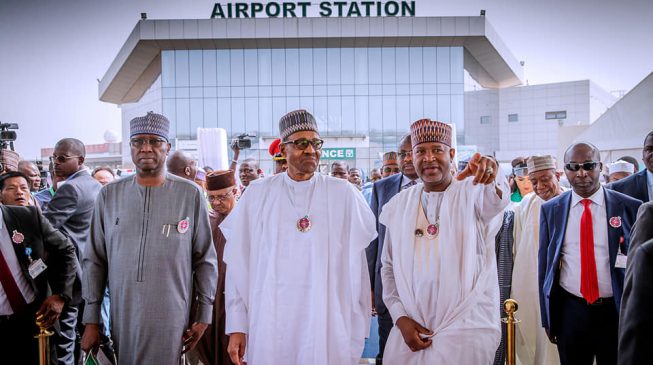 Phrank Shaibu, senior special assistant on public communication to Atiku Abubakar, presidential candidate of the Peoples Democratic Party (PDP), has accused President Muhammadu Buhari of taking credit for projects executed by the Peoples Democratic Party (PDP).
In a statement, Shaibu said most of the developmental projects inaugurated by Buhari were started and mostly fully paid for by the past PDP administrations of Olusegun Obasanjo, Umaru Yar’Adua and Goodluck Ebele Jonathan.
He advised the ruling All Progressives Congress (APC) administration to focus on its core mandate and “desist from propaganda”.
Shaibu said this shortly after Buhari inaugurated the new terminal of the Nnamdi Azikiwe International Airport, Abuja.
He said the new terminal was conceived, signed, awarded and paid for by the Jonathan administration.
Although he admitted that government is a continuum, Shaibu asked the APC government to give credit when necessary.
“It needs to be emphasised that new terminal of the Nnamdi Azikiwe International Airport is among the many projects conceived and started by the immediate past PDP administration of Jonathan,” he said.
“The last administration had obtained a $500 million facility from the Chinese Exim Bank, with additional funding of $100 million from Nigeria to build four international terminals in Port Harcourt, Lagos, Abuja and Kano.
“We understand that governance is a continuum and that’s why there should not be unnecessary orgasms by sympathisers of the Buhari’s administration in trying to change the narrative that the new terminal and the one earlier commissioned in Port Harcourt were achievements of the Buhari administration.”
He mentioned the completion of Kaduna-Abuja railway line, and the Abuja metro line among projects that were at advanced stages before the expiration of Jonathan’s tenure.
Shaibu challenged Buhari to list the projects he has conceived, started and inaugurated in the last three and a half years.
“Isn’t it strange that the APC is now resorting to projects conceived and executed by PDP as its achievements in office after spending almost four years in office with nothing to show for it?” he asked.