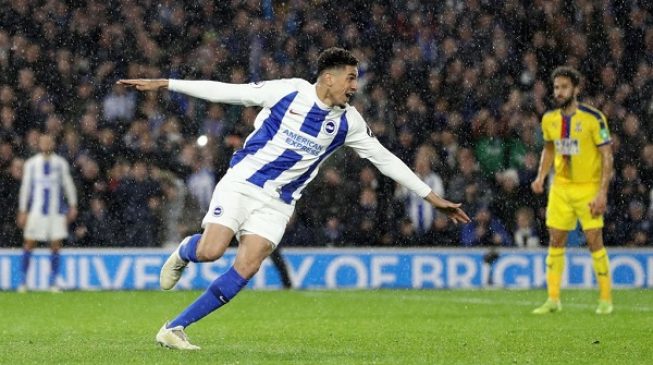 Leon Balogun, Super Eagles defender, scored his first goal in the English Premier League (EPL) on Tuesday, helping 10-man Brighton and Hove Albion to a 3-1 win over Crystal Palace.
Brighton started the game brightly, taking the lead through Glenn Murray’s penalty on 24 minutes before teammate, Shane Duffy, was sent off for pushing an opponent.
This prompted manager, Chris Houghton, to introduce Balogun, who has only appeared thrice in the league, to shore up his defence.
The Germany-born Eagle, however, went upfield for a corner kick just 24 seconds after his introduction and scored with a stunning in-air volley to double Brighton’s lead.
Balogun’s goal is the second fastest goal by a substitute in Premier League history.
In other games played same night, Manchester City extended their lead to five points at the top of the table with a 2-1 victory at Watford.
Leroy Sane and Riyad Mahrez scored for Guardiola’s entertaining side, while Abdoulaye Doucoure got Watford’s consolation goal.
West Ham also won 3-1 at home against Cardiff, while Bournemouth scored two goals in the first half to earn a 2-1 win over Huddersfield.