Booing of Buhari shows Saraki, Dogara ‘have lost grip’ of the national assembly 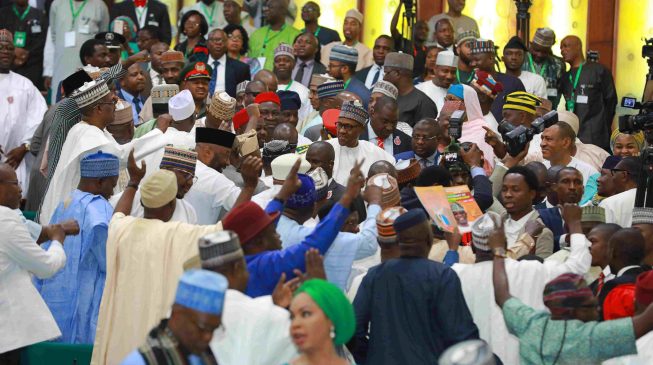 Kayode Ojo, a governorship aspirant of the All Progressives Congress (APC) in the last election in Ekiti state, says heckling of President Muhammadu Buhari during the budget presentation is a signal that the leadership of both chambers have lost grip of the national assembly.
Speaking with journalists in Ado-Ekiti, capital of Ekiti, on Thursday, Ojo said such scenario was not witnessed under former Presidents Olusegun Obasanjo and Goodluck Jonathan despite the row between the executive and legislative arms of government.
Ojo said Nigerians were disappointed that the federal lawmakers, who were to be role models to the youth, “threw caution to the winds” because of partisan interest.
Ojo said the action is a strong indication that there are some “hooligans” in the hallowed chambers who seek positions for personal aggrandizement and not for the well-being of Nigerians.
“What we saw on Wednesday at the hallowed chambers was a show of shame. Our leaders must know that Nigerians are becoming more enlightened by the day and their democratic awareness has gone up and putting up such ignominious conduct could dissuade our people from participating in electoral system,” he said.
“Most worrisome was the fact that Senator Saraki and Hon Dogara watched helplessly as the PDP lawmakers began their interruption by singing against the president in a derisive manner before the ruling APC lawmakers joined to cheer him, thereby making the place uncontrollable.
“It is sad that rather than raising the stake of our democratic credentials, we are descending to the abyss through morbid politicking and hate speeches from our leaders. After 19 years of unbroken democracy in Nigeria, we are having the most divided and politicized National Assembly in Nigeria’s history under Senator Saraki and Hon. Dogara and posterity shall judge them.
“By way of configuration of National Assembly, it wasn’t that the federal lawmakers were not divided as we are witnessing under the administrations of Obasanjo and Jonathan, but they did it with caution, credibility and respect for national unity.
“Saraki must learn from how Senator David Mark piloted the Senate for eight years. He allowed politics when lawmakers were lobbying for passage of bills and taking of positions on issues of interest to parties, but never allowed politicking when decisions were to be taken on issue of national interest like budget presentation.
“No matter what anybody does on the floor of the National Assembly, it has no pernicious effect on President Buhari, because only the Nigerian electorate have the capacity to decide his political fate.”