Buhari dancing on the graves of innocent Nigerians, says Secondus on APC rally 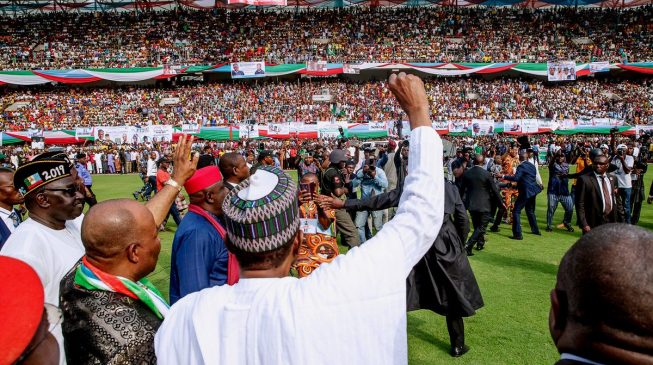 Uche Secondus, national chairman of the Peoples Democratic Party (PDP), says President Muhammadu Buhari launched his reelection campaign when residents of Zamfara state were under bandits attack.
The All Progressives Congress (APC) commenced its reelection campaign in Uyo, Akwa Ibom state capital, on Friday.
Accusing the president of making fake promises, Secondus said it is sad that Buhari launched his reelection bid when the people of  Zamfara were crying for help.
The PDP chairman said Nigerians expected Buhari to put politics aside and find solutions to the “unmitigated killings in some parts of northern Nigeria”.
He compared the actions of Buhari and the national leadership of the APC to “dancing on the graves of innocent Nigerians who elected him in 2015 and have now been killed by bandits because the government they elected refused to protect them.”
“It is sad watching the president speak in Akwa Ibom state, when the people of Zamfara state and other states, especially from the north-west and north-central, even in the north-east, are crying for help,” he told reporters.
“These are people who lined up in the sun about four years ago, thinking that President Buhari would be a father to them all.
“Now they cannot go to their farms and their homes had been taken over by bandits. Yet, their father, the president, was busy dancing and giving out fake promises again.”