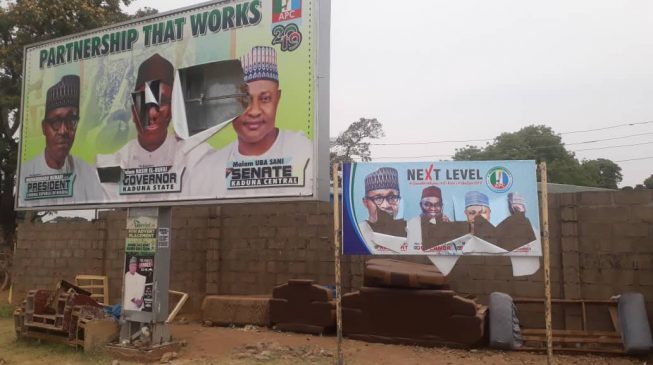 The Peoples Redemption Party (PRP) has accused the All Progressives Congress (APC) of sponsoring the destruction of campaign posters and billboards of Shehu Sani, its candidate in Kaduna central senatorial district.

Samaila Sulaiman, the secretary of the party in the state, who said this in a statement on Sunday, described the act as irresponsible.

He said it shows the ruling party’s level of impunity.

“The PRP in Kaduna state is experiencing an act of irresponsibility from the ruling APC in Kaduna state where some of her candidates sponsored thugs and loyalists to vandalise our Posters/Billboards across the Central Senatorial District,” the statement read.

“This allegation is not just a mere one, when you take a look at all streets of Kaduna town, you will see how our posters are covered with those of the APC.

“This is a clear testimony of the level of impunity of the APC government of demonstrating the state of undemocratic, unfair and brutal attitude.”

Meanwhile, a group known as the Buhari 2019 Supporters Movement has accused the Peoples Democratic Party (PDP) and supporters of Sani of destroying the campaign billboards of APC within and outside Kaduna metropolis.

In a statement Abubakar Umar, chairman of the group, said the billboards were destroyed by thugs suspected to be working for Sani “and his allies in the PDP”.

Umar said his group discovered that “Senator Sani and his friends in the PDP were behind late night destruction of campaign billboards of our beloved President Buhari and those of Governor Nasir Ahmed el-Rufai”.

The group condemned what it described as “pedestrian political tactics of destroying opponents’ billboards in the city and even on the highways”.

“We are appalled that there seems to be a deliberate attempt to resort to the use of thuggery as part of a calculated attempt to scuttle the peaceful and orderly 2019 elections, as envisaged by both INEC, local and international democratic institutions,” the statement read.

“It is unacceptable that Kaduna State is being subtly used as the experimental Guinea Pig by suspected agents of political destabilization as we approach the general elections.

“After conducting the media round the metropolis, to assess the level of damage and destruction of Buhari and Elrufai Billboards, we have resolved to inform the relevant authorities in Kaduna State to take the necessary action, as provided by the laws of this country”.