Buhari to present Budget 2019 on Wednesday — but reps threaten boycott 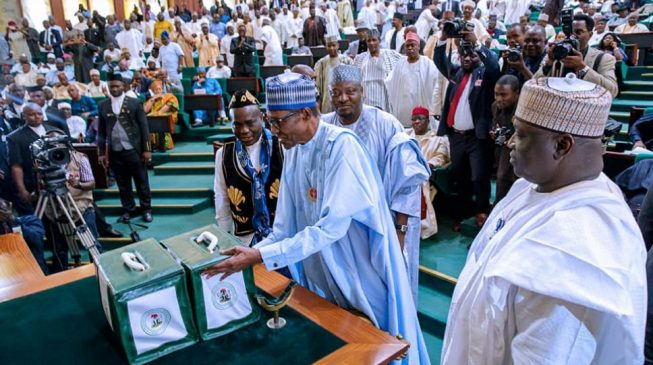 President Muhammadu Buhari will present the 2019 budget proposal before the national assembly on Wednesday.
This was announced in a letter read on the floor of the house of representatives by Yakubu Dogara, the speaker, on Thursday.
“May I crave the kind indulgence of the House of Representatives to grant me the slot of 11 hours on Wednesday, 19th December, 2018 to formally present the 2019 appropriation bill in a joint session,” the letter read.
After reading the letter, some lawmakers threatened to boycott the budget presentation over the recent comment of Udoma Udoma, minister of budget and national planing.
At the end of the federal executive council (FEC) meeting in Abuja on Wednesday, the minister had said the 2019 budget proposal was ready but the national assembly is yet to fix a date for its presentation.
“As you already know, the budget is ready. We are liaising with the national assembly because they are to give us a date. If they say today, we will go. The budget is ready,” he had said.
Chika Adamu from Niger state had Adamu alleged Udoma told a lie on national television, and called on his colleagues to demand an apology from the minister.
Mark Gbillah from Benue state corroborated his claim, saying “it is a statement he (Udoma) made categorically.”
“He lied against this honourable house on national television. I want to join my colleagues to request a formal apology on TV, else we will refuse to attend that budget session with Mr President,” he said.
Mike Adeniyi from Ogun state also supported his submission, saying “the executive arm has always portrayed the parliament in bad light.”
“The minister must come and apologise. If not, the president will come to meet an empty house,” he added.
However, Femi Gbajabiamila, majority leader of the house, accused his colleagues of determining the minister is guilty without proper check.
He said: “The minister called me this morning; he was alarmed and upset and shocked. He said he was just reading something in the papers ascribed to him and that he never said such a thing and he is writing a rejoinder as we spoke.”
“So I think we should tarry a while because you are accusing someone of lying. Let us not turn this house into a partisan house.”
But Muhammad Soba immediately accused him of “sycophancy”.
“We have seen how sycophancy has been taken to the next level. That is the APC government for you,” the lawmaker retorted.
Thereafter, Dogara called on his colleagues to give the minister sometime “to see if he will truly issue a rejoinder.”
“But if we don’t see that (a rejoinder), then we have an issue because we will not allow this institution to be blackmailed. If nothing is done, we will take a concrete action on it,” he said.
In October, the council had approved the 2019-2021 medium-term expenditure framework (MTEF) and fiscal strategy paper (FSP), and forwarded same to the national assembly for its consideration and approval.
In the following month, Udoma announced that the government was considering a reduced budget of N8.6 trillion, compared to the N9.1 trillion approved by the national assembly for 2018.
He said the decision was due to reduced government revenue projection for the year.