Christmas in Lebanon: ‘Jesus Isn’t Only for the Christians’ 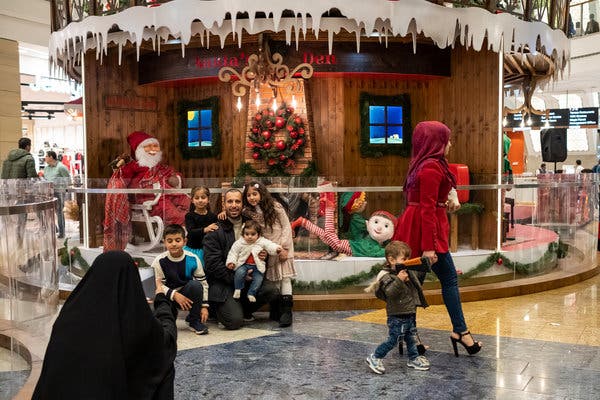 A family at a Christmas-themed display at the City Center mall in Beirut, where children waited in line to whisper wish lists to Santa.

BEIRUT — The Iranian cultural attaché stepped up to the microphone on a stage flanked by banners bearing the faces of Iran’s two foremost religious authorities: Ayatollah Khomeini, founder of the Islamic Republic, and Ayatollah Khamenei, the current supreme leader.

“Today, we’re celebrating the birth of Christ,” the cultural attaché, Mohamed Mehdi Shari’tamdar, announced into the microphone, “and also the 40th anniversary of the Islamic Revolution.”

“Hallelujah!” boomed another speaker, Elias Hachem, reciting a poem he had written for the event. “Jesus the savior is born. The king of peace, the son of Mary. He frees the slaves. He heals. The angels protect him. The Bible and the Quran embrace.”

“We’re celebrating a rebel,” proclaimed a third speaker, the new mufti of the Shiite Muslims of Lebanon, the rebel in question being Jesus.

Ahmed Kabalan, left, a Shiite mufti, and Baran Vartanian, center, a priest with the Armenian Church, at an Iranian-sponsored Christmas concert in Beirut.CreditNatalie Naccache for The New York Times 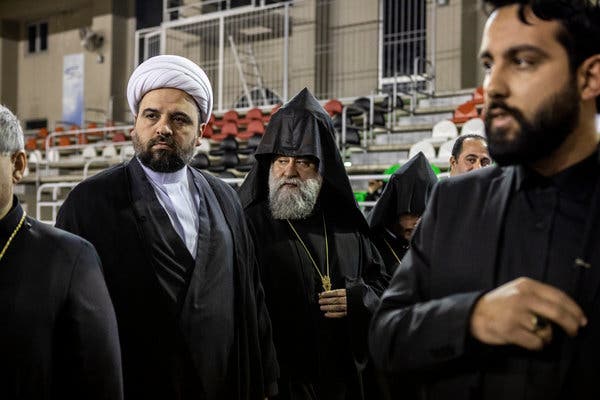 Ahmed Kabalan, left, a Shiite mufti, and Baran Vartanian, center, a priest with the Armenian Church, at an Iranian-sponsored Christmas concert in Beirut.CreditNatalie Naccache for The New York Times

The mufti, Ahmed Kabalan, went on to engage in some novel religious and political thinking: Christians and Muslims, he said, “are one family, against corruption, with social justice, against authority, against Israel, with the Lebanese Army and with the resistance.”

The proclamations from the stage were applause lines — perhaps against the odds, given that the audience at the Iranian-sponsored event on Saturday consisted mostly of observant Shiites from the Hezbollah-dominated southern suburbs of Beirut. Occasionally, the crowd chanted praise for the Prophet Muhammad.

When a pair of Iranian bands flown in for the occasion began playing Assyrian and Persian Christmas carols, the audience clapped along.

From its founding as an independent republic, Lebanon has walked a tightrope, not always successfully, with its Muslim and Christian populations making up most of the country’s 18 officially recognized sects.

Nearly 30 years after the end of a civil war in which Beirut was cloven into Muslim and Christian halves connected only by a gutted buffer zone, Lebanese from all different sects now commonly mingle every day at home, at work and in public.

But few seasons frame the everyday give-and-take of religious coexistence quite like Christmastime in Lebanon.

On stage at the Christmas concert: banners with the faces of Iran’s past and current supreme leaders, and a Christmas tree.CreditNatalie Naccache for The New York Times 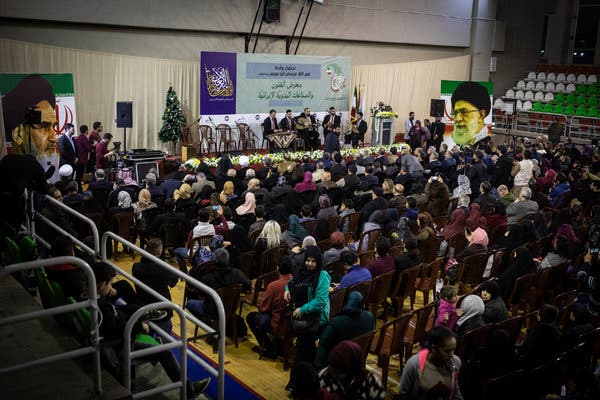 On stage at the Christmas concert: banners with the faces of Iran’s past and current supreme leaders, and a Christmas tree.CreditNatalie Naccache for The New York Times

That Christmas is important in Lebanon, whose population includes a significant proportion of Christian, is no surprise. But the holiday here — perhaps helped by the presents, the feasting and the twinkly lights — also has a much more universal appeal.

Half the women snapping selfies with the colossal Christmas tree that stands across a downtown street from Beirut’s even more colossal blue mosque wear hijabs.

Children with veiled and unveiled mothers wait in line at the City Center mall to whisper wish lists to the mall’s Santa, and schoolchildren of all sects exchange Secret Santa gifts in class.

Even Hezbollah, the Shiite political movement and militia that the United States has branded a terrorist organization, has helped ring in the season.

In previous years, it imported a Santa to Beirut’s southern suburbs to distribute gifts. On Saturday, Hezbollah representatives were on hand for the Iranian Christmas concert, an event that also featured handicrafts by Iranian artists, but the organization skipped Santa this year because of financial constraints.

These demonstrations of Christmas spirit seem intended, analysts said, to demonstrate Hezbollah’s inclusivity as a major political and military force in Lebanese society and to highlight its political alliances with Christian parties.

Tasnim Tarjoman, 5, wore reindeer antlers to the concert. She wanted a Barbie from Santa.CreditNatalie Naccache for The New York Times 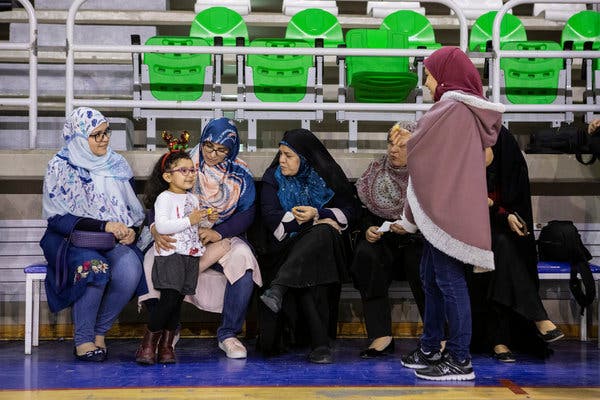 Tasnim Tarjoman, 5, wore reindeer antlers to the concert. She wanted a Barbie from Santa.CreditNatalie Naccache for The New York Times

But just as it has for many secular Americans, the commercial appeal of Christmas has proved strong for many non-Christians here.

“We’re Lebanese,” said Ruba Zay’our, a Muslim woman who had come to the City Center mall in southern Beirut with her family and her sister’s family to take photos with the tree and introduce the children to Santa. “We want presents!”

Ms. Zay’our had decorated a small Christmas tree at home, which, to her frustration, was losing a branch a day at the curious hands of her toddler son. Her oldest son, in ninth grade, was celebrating by asking his Secret Santa at school for a PlayStation 4 game.

Nada Suweidan, an accountant shopping at the mall, wasn’t certain how much of her son’s wish list Santa would fulfill this year.

But Ms. Suweidan was certain of the religious propriety of her family’s Christmas celebration, which involved the whole family getting together and her brother dressing up as Santa for the children. After all, Jesus is considered a prophet in Islam.

“Jesus isn’t only for the Christians,” she said.

Much as the holiday lights flashing around Beirut seemed to defy the exasperating reality of Lebanon’s electrical grid, which is so overwhelmed that daily blackouts are scheduled across the city, the Lebanese embrace of Christmas can be read as a temporary reprieve from the economic and political gloom.

The Christmas display at the mall includes a nativity scene.CreditNatalie Naccache for The New York Times 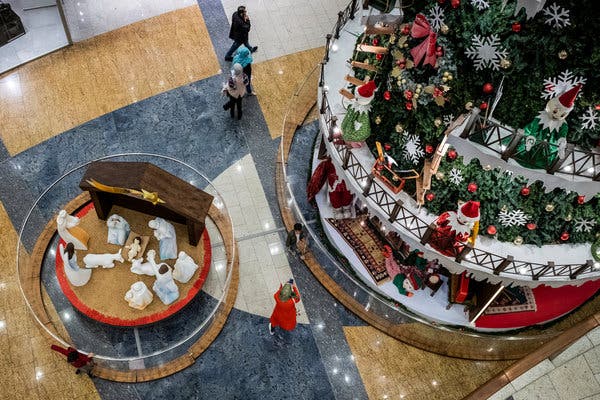 The Christmas display at the mall includes a nativity scene.CreditNatalie Naccache for The New York Times

“We need a real Santa Claus to come and take all the Lebanese away,” said Mohamed Ibrahim, a young electrician who was taking a selfie with his new wife, Taghrid Ibrahim, in front of the mall’s nativity scene.

“Wherever he wants — anything’s better than here,” joked Ms. Ibrahim, a teacher.

Ms. Ibrahim grew up celebrating Christmas at school and in her home village, where every year a local man dressed up as Santa, and said they had put up a tree at home. “Christmas is the only time you see everyone together with their family,” she said.

“Everyone is celebrating,” Mr. Ibrahim said. “You feel like everyone is alike.”

Christmas is by no means a universal part of the holiday calendar of observant Muslims, especially conservative ones, some of whom consider Christmas decorations and other rituals forbidden.

In previous years, Lebanese Muslims have occasionally received mass text messages or pamphlets urging them not to participate in Christmas. In 2015, according to one television news report, some Christmas trees in Tripoli, in the conservative, Sunni-majority north, were burned down.

But such instances have never happened in the Shiite south, even during Lebanon’s civil war, which lasted from 1975 to 1990.

“We follow Imam Ali, who told us to respect other cultures,” said Ahmad Tarjoman, 48, a Beirut-based correspondent for Iranian state television who attended Saturday’s Christmas concert with his wife and his daughter, Tasnim, 5, who wore a pair of small reindeer antlers.

The family has a small Christmas tree at home, and Tasnim’s parents have brought her to see Santa — often called Papa Noël in Lebanon — at one of the local malls every year. Tasnim’s investment in Christmas, as a result, was somewhat less philosophical than her father’s.

“She adores Santa,” Mr. Tarjoman said. “This year she wants a Barbie. Even though she already has 50 Barbies.”

Because of an editing error, an earlier version of this article misstated how much of Lebanon’s population is Muslim or Christian. They make up most of the country’s 18 officially recognized sects, not just two.