CUPP to Buhari: The best way to prove you aren’t cloned is to sign the electoral bill 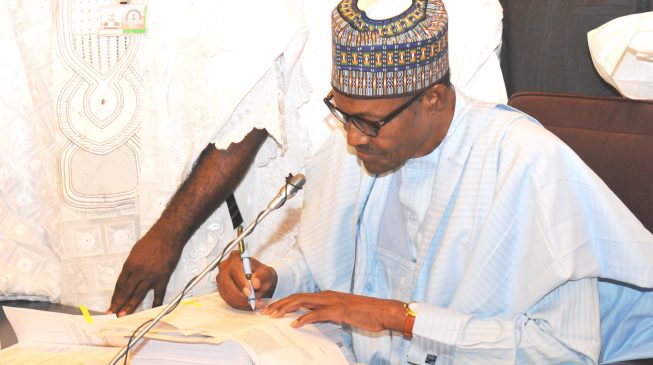 The Coalition of United Political Parties (CUPP) has accused President Muhammadu Buhari and the All Progressives Congress (APC) of plans to frustrate the credibility of the 2019 elections.

The group, in a statement by Ikenga Ugochinyere, its spokesman, said Buhari has deliberately refused to sign the electoral amendment bill, 2018.

In September, Buhari turned down the bill for the second time, asking the national assembly to revise some clauses.

The national assembly had passed the bill on July 24 and transmitted to the president on August 3.

CUPP wondered how Buhari, “who had claimed to be a victim of rigged elections and how an improved electoral process benefitted him in 2015 is now the greatest antagonist to free and fair election”.

The group asked the president to prove to Nigerians he is not cloned by signing the bill upon his return from Poland.

“Many Nigerians do not believe that the Buhari they knew in 2015 who declared that he belonged to everyone and belonged to no one is the same person dividing Nigerians along 97% and 5% and exhibiting the worst levels of nepotism in the appointment of heads of security agencies,” the statement read.

“Hence, President Buhari’s best way to prove to the Nigerians he spoke to in Poland that he is not cloned is to come home as a true Nigerian leader and sign the 2018 amended Electoral Bill into law.”

The group further alleged that Buhari intentionally withheld assent to the bill to till the ECOWAS deadline as an excuse for not signing the bill.

“We are also sad to say this to you; that there is intelligence that the President has agreed with his kitchen cabinet not to sign the amendment into law,” it said.

“We have been informed that after several undue delays, the President is set to communicate the National Assembly anytime from today that he would not be able to sign the amendment due to the existence of Article 2 of the ECOWAS Protocol on democracy and good governance which prohibits countries from making Electoral Act amendments less than six months to elections unless there is consent of the political parties.”

CUPP also raised allegations over a purported plan by the APC to pre-load the card readers for the 2019 elections, and that there is an alleged plan to destabilise the elections in 10 states including Edo, Rivers and Benue.

It also alleged the politicisation of security agencies, while passing a vote of no confidence on Ibrahim Idris, inspector-general of police.

The group said Buhari had exhibited the worst levels of nepotism in the appointment of heads of security agencies.