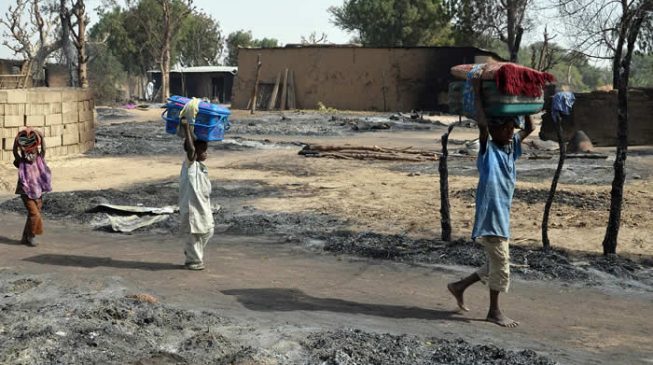 In the last two years, armed bandits have reportedly killed over 3000 people in Zamfara state. At least N1.2 billion has been paid as ransom to secure the release of those abducted during the period. The activities of armed groups have rendered thousands homeless and destroyed the livelihood of farmers and herders.
The rampaging gunmen have turned Zamfara to the state of nature where life is solitary, poor, nasty, brutish and short.
While narrating the pathetic situation in the state last month, Kabiru Marafa, senator representing Zamfara central, revealed how a pregnant woman who was kidnapped eventually gave birth in captivity. All the efforts government put in place to check the wanton killings have not yielded the desired result. Each time the federal government launches a military operation against the bandits, they regroup and return with vendetta.
On Saturday, armed men raided villages in Tsafe local government area, killing a number of people. Some of those affected took to the streets on Monday. Shortly after the protest, Amnesty International said its findings showed that in two weeks, at least 50 people had been killed in Birnin Magaji, Maradun and Tsafe local government areas while 1700 had been displaced in Tsafe alone.
The deadly conflict in Zamfara is generally believed to have started when farmers and herders clashed in 2012. The conflict eventually turned into armed banditry, with the first major attack in ’Yar Galadima in April 2014. Over 200 people were killed in that tragic incident.
Although the crisis predates this government, there is no gainsaying it has grown worse under the current administration. It appears Nigerians have not paid enough attention to the carnage in this north-west state probably because it does not have the ethnic, political and religious flavour of the farmers/herders crisis in the north-central and the Boko Haram insurgency in the north-east.
Interestingly, the government, in a campaign document tagged NextLevel, said it had recorded success with the military operation fighting communal militias and bandits in Zamfara but the evidence on ground points to the contrary. Abdulrahman Dambazau, minister of interior, has now raised the alarm — that the attacks in Zamfara are on the rise and this would affect food security in the country.
In November, Abdulaziz Yari, governor of the state, announced that his government had done whatever was humanly possible to address the issue, and that the continuous attacks should be blamed on the federal government-controlled security agencies. If Yari is claiming to be helpless, should we expect the same of the president? Who should Zamfara people turn to now that their land has been converted into a theatre of war?
It it time for President Buhari to ACT decisively and SAVE more lives and communities in Zamfara from the messengers of death and destruction.