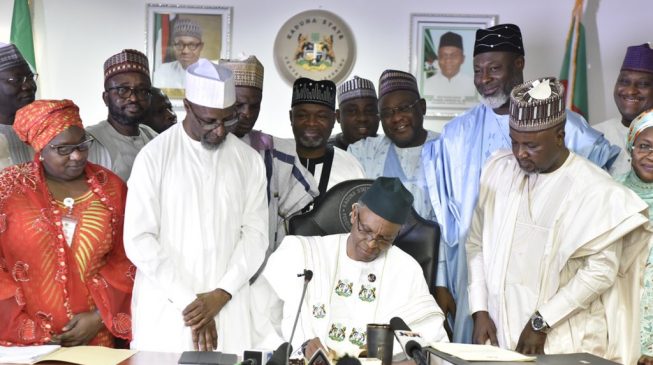 Nasir el-Rufai, governor of Kaduna, says as a beneficiary of public schools, he owes it to the children of “ordinary people”, a duty to restore public education in the state.

El-Rufai said this on Friday when he signed the state budget into law.

The approved budget size is N157.449bn, with the capital component of N94.47bn, while recurrent expenditure is N62.97bn.

Speaking during the signing of the of the document at the government house, el-Rufai said the budget is a reflection of his administration’s commitment to human capital development.

He said the social sector, including education and health, will gulp N39.14bn, representing 41 percent of the N94bn capital budget with education taking N25.4bn, while health has N13.1bn.

This, according to him, is a “concrete demonstration of government’s desire to promote equality of opportunity by putting the people first.”

He said though the programme to improve infrastructure in the education sector was hampered following the senate’s rejection of the $350m World Bank loan, the government had made significant impact in the sector.

“It is a consistent pattern of our budgeting that the social sector takes the largest chunk of capital commitments,” el-Rufai said.

“Thus, while the overall budget size is smaller than it was in previous years, the proportion we devote to human capital development does not shrink.

“For many of us, government schools gave us the education that enabled us to rise above the circumstances of our birth. “We owe the children of ordinary people a duty to restore public education as a lever for social mobility.

“The programme to improve infrastructure in the education sector has been hampered by the irresponsible denial at the Senate of our $350m World Bank loan.

“But we soldier on with the resources we have. I am happy to report that we have completed the recruitment of 25,000 new primary school teachers. We are now recruiting 7,600 teachers for the public secondary schools.”