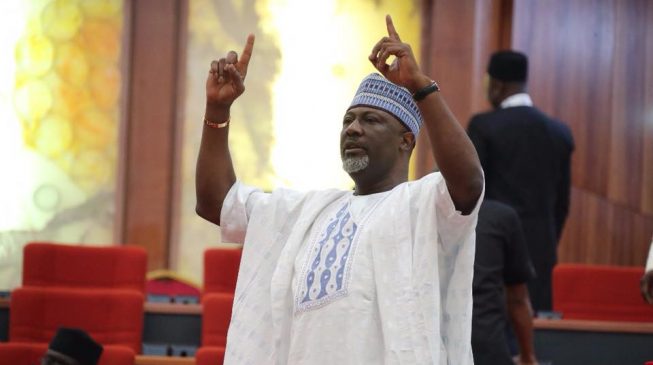 Dino Melaye, senator representing Kogi west senatorial district at the national assembly, says President Muhammadu Buhari is responsible for poverty and hunger in Nigeria.
In the latest of his numerous social media singles, Melaye said to end hunger and poverty, Nigerians must vote out the All Progressives Congress (APC) to end poverty and hunger.
“Hunger in the land, there is poverty in the land, let us say no to poverty, let us say no to hunger, by voting out President Muhammadu Buhari,” Melaye said.
“That is the only way to end hunger, that is the only way to end poverty. Please, Nigerians, vote out the APC and that is the only way these pretentious people, these deceptive people can understand that we know that they are responsible for hunger.”
In his new single predominantly in Yoruba language, Melaye said Buhari has made garri expensive, made pounded yam unreachable, and seats as king over popular Nigerian staple, rice.
Melaye is known for his pro-struggle songs against his selected opponents at different times in his recent political career.
In 2017, he sang against Yahaya Bello, governor of Kogi state, who was in a political battle with the senator over a recall process.
Melaye became a songster in 2016, following the release of his ultra-hit, Ajekun Iya, after his self-proclaimed victory in the certificate scandal.