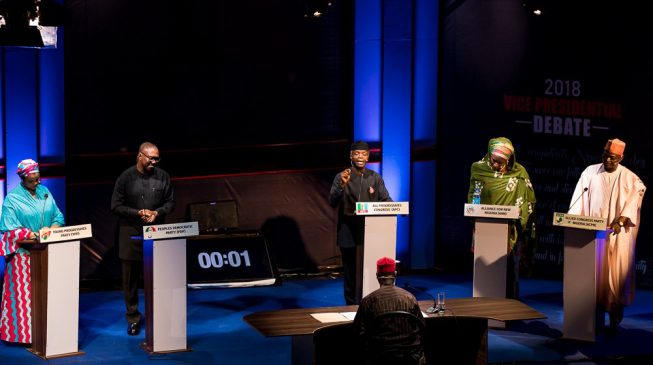 To keep politicians accountable at the vice-presidential and presidential debate, TheCable was live-checking the supposed facts and figures being bandied by those seeking the highest offices in the land.

Peter Obi of the PDP, and APC’s Yemi Osinbajo are debating alongside Ganiyu Galadima of ACPN, Khadijah Abdullahi-Iya of ANN and Umma Abdullahi-Getso of YPP.

OBI: There are about two million vehicles in Nigeria.

CHECKED: False. According to the National Bureau of Statistics (NBS), Nigeria has a total vehicle population of about 11,547,236 as at the third quarter of 2017.

OSINBAJO: Lagos-Ibadan expressway was “practically” abandoned for 16 years under PDP.

CHECKED: False. The Goodluck Jonathan administration made many interventions on the Lagos-Ibadan expressway, awarding a multi-billion naira contract to Julius Berger and RCC. The administration fixed the Ibadan to Ogere section of the road.

CHECKED: Largely correct. Price of fertiliser has experienced a drastic drop following the Nigeria-Morocco fertiliser deal. Current prices are between N5,500 and N6,500. As at 2016, a bag of fertiliser sold above N10,000.

OBI: Nigeria has fallen on the global competitive index from 124 to 127.

CHECKED: False. According to the latest (2018) World Economic Forum report, Nigeria rose on the index by 10 places. Obi’s claim was true in 2016.

OBI: Total loans from the banks in Nigeria is N19trn and only 0.5% goes to SMEs

CHECKED: Yet to be verified.

OSINBAJO: There is a tax threshold for SMEs, SMEs get to a level before they pay taxes.

CHECKED: True. There is a lower tax rate of 20% applicable to small companies in manufacturing, agriculture and mining within their first five years of business. The problem with the law is that the turnover threshold to qualify is only N1 million which is not in tune with current realities.

CHECKED: False. According to Afriexim Bank, Intra-Africa trade is around 15 percent. In 2016, intra-African exports made up 18 percent of total exports according to Brookings Institution. According to UNDP, Africa’s share of global trade is currently 2 percent.

CHECKED: Point valid, figures near accurate. As at 2017 NBS figures showed that Nigeria’s foreign exchange earnings from oil the oil sector stood above 90%.

OBI: To bring out goods from Apapa cost more than it takes to bring goods from Europe

GALADIMA: We have four refineries in Nigeria, and none is working.

CHECKED: The refineries according to NNPC reports are working at sub-optimal levels. Not totally dysfunctional.

UMMA GESTO: Nigerian Airways was one of the largest in the world.

CHECKED: False. Nigerian Airways one of the largest in Africa.

OBI: The federal government spends only N5 on the health of each Nigerian citizen per day.

CHECKED: True. Based on budgetary and population calculations done by TheCable, the federal government allocates N4.7 to every Nigerian’s health per day.

OBI: Apple Inc’s market cap is bigger than the economies of Nigeria, South Africa and Egypt.

CHECKED: Apple’s market cap today is $788.57 billion. The economies of these three countries are bigger than Apple. When Apple was $1 trillion a few months ago, it was bigger in dollar terms.

OSINBAJO: Nigeria producing 90% of the rice we consume.

CHECKED: Dicey. According to the Central Bank of Nigeria, the country’s rice import has dropped drastically with a surge in local production. The CBN estimates that Nigeria has legally imported less than 25,000 tonnes of rice in 2018 — validating Osinbajo’s claims.

Africa Rice Centre says Nigeria produces 75% of its rice consumption, adding that rice smuggling is a big problem in Nigeria. Nobody tracks the amount of rice smuggled into the country.

According to the Thailand Rice Exporters Association, the rice exported to Nigeria between January and October 2018 was 6,121 tonnes, representing a drastic drop when compared to 2016 when all-year import stood at 58,260 metric tonnes.