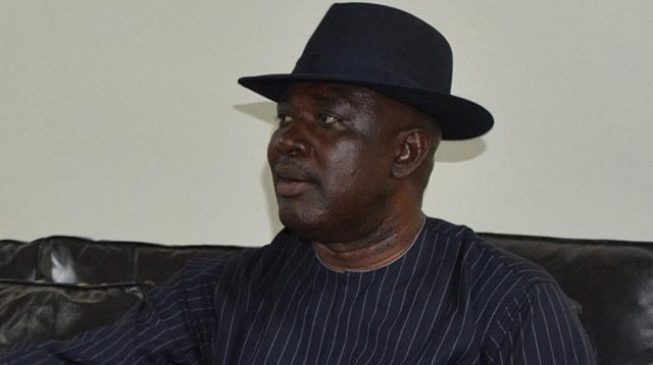 Heineken Lokpobiri, minister of state for agriculture, says because of the Economic Community of West African States (ECOWAS) protocol, neighbouring countries are being used to smuggle rice into Nigeria.
In a statement on Friday, George Oji, media aide of the minister, quoted Lokpobiri as saying the development is frustrating the federal government’s efforts to stop the importation of rice.
The minister raised the concern during a meeting with Ndine Gbossa, the new country representative of International Fund for Agricultural Development (IFAD).
“The challenge we have with our neighbours is that because of the extant ECOWAS protocol, people will dump their rice products in their region and re-bag them and bring them into Nigeria,” he said.
“The reason is that under the ECOWAS protocol, any goods produced within the sub region can have free access to any market within the region.
“Based on that, those from Thailand would go to Benin Republic with their parboiled rice and then re-bag them as though they were produced in Benin Republic and then smuggle them into Nigeria thereby denying the people of Benin the opportunity to grow rice and then benefit from the Nigerian market.
“Because of that, we have engaged the government of Benin Republic, up to the presidential level. The president had to invite the president of Benin Republic to engage him because we are neighbours; let’s see how we can work together and curb this issue of smuggling.”
Lokpobiri commended IFAD for supporting the nation’s agricultural value chain development programme with $500 million.
“We take our partnership with IFAD very seriously and we appreciate the investments and the support that we are getting from you,” he said.
“Today, Nigeria is rated as the highest producer of rice and cassava in Africa, courtesy of IFAD intervention and the Anchor Borrowers Programme and Nigerians answering the clarion call of this administration to go back to the farms to produce what we eat and eat what we produce.”
On her part, Ndine said an additional $89 million has been approved for Nigeria in the value chain development programme, which brings the total investment in the programme to $228 million.
“Altogether, we have investment in Nigeria that is worth half a billion dollars,” she said.
“Nigeria is one of the biggest investment countries for IFAD, so it is a very important country.”
TheCable