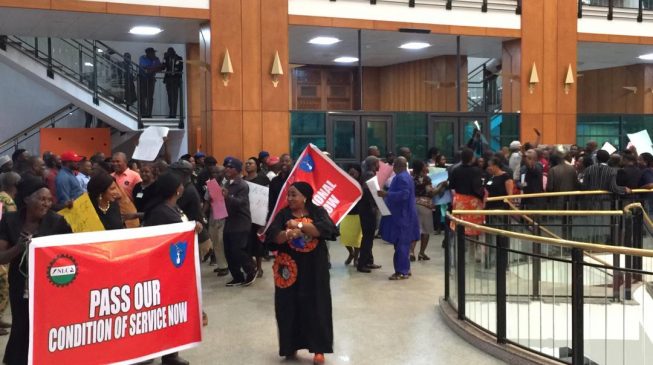 The Parliamentary Staff Association of Nigeria (PASAN) has threatened to embark on an indefinite strike if the national assembly management does not meet its demands.

The workers picketed the premises of the national assembly on Tuesday, denying lawmakers access to both chambers of the parliament.

They are aggrieved over the non-payment of outstanding salaries and allowances.

In response to Tuesday’s demonstration, Senate President Bukola Saraki and Yakubu Dogara, speaker of the house of representatives, directed the Mohammed Sani-Omolori, clerk of the assembly, to resolve the issues before the end of the week.

On Thursday, the lower legislative chamber summoned Zainab Ahmed to explain why funds captured in the 2018 budget were yet to be released.

But speaking with journalists on Friday, Musa Bature, chairman of PASAN, said the earlier demonstration was a prelude to an indefinite strike action billed to commence on December 18.

Bature said the workers put it hold on because of the intervention of the national assembly leadership.

“We thank the political leadership of national assembly for their intervention,” he said.

”The leadership of the national body of PASAN as well as zonal leadership and members of the two chapters that make up FCT zone, namely National Assembly Service Commission and Public Complaint Commission, will not relent in our effort.

”We hereby reiterate that the proposed indefinite industrial action that will ground all legislative activities of national assembly will commence as earlier scheduled if the demands are not met as promised.”