Ndume: Saraki is yet to read Buhari’s letter on budget presentation 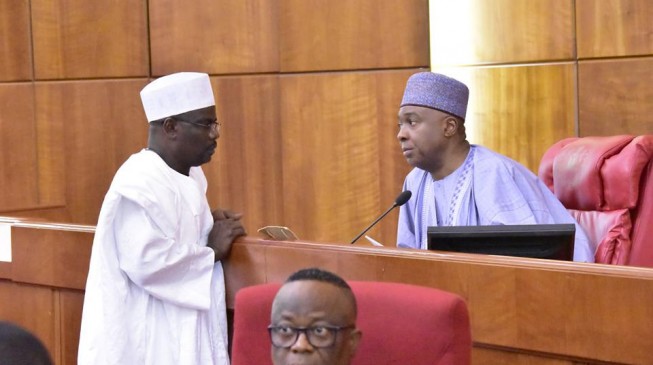 Ali Ndume, senator representing Borno south, says President Muhammadu Buhari’s letter on the request to present the 2019 budget on Wednesday is yet to be read on the floor of the senate.

The senate president who presides over plenary usually reads the letters from the executive.

Speaking on the importance of the presentation, Ndume pleaded with members of the house of representatives who threatened to boycott the budget presentation to have a rethink.

Some members of the lower legislative chamber had threatened to boycott the budget presentation over a comment credited to Udoma Udoma, minister of budget and national planning,  that the national assembly was  responsible for the delay in presentation.

The minister later clarified the statement that generated controversy.

But in a chat with NAN on Saturday, Ndume urged the federal lawmakers who issued the threat to reconsider their position in the interest of the nation.

The lawmaker noted that to quicken passage, it was imperative for the budget to reach the parliament before the Christmas break.

“I understand the reactions of the honourable members, is as a result of the unnecessary comment credited to the minister of budget as to who is responsible for the delay,” he said.

“My take on this is that two wrongs do not make a right and I want to appeal to my colleagues in the house of representatives to have a rethink because the president is not responsible for what the minister was alleged to have said.

“I feel national interest should be placed above any individual or group interest. As for the senate, the letter from Mr President as to when to present the budget has not been read.

“I feel the best thing to do is for the president to present the budget, especially before we go on Christmas break so that copies of the budget will be circulated to members to enable them start work on it.

“On resumption immediately after Christmas, we will start working on considering the budget for passage.

“So, I feel the reasonable thing to do is to receive Mr President in a joint session because it is very key to our national interest.”