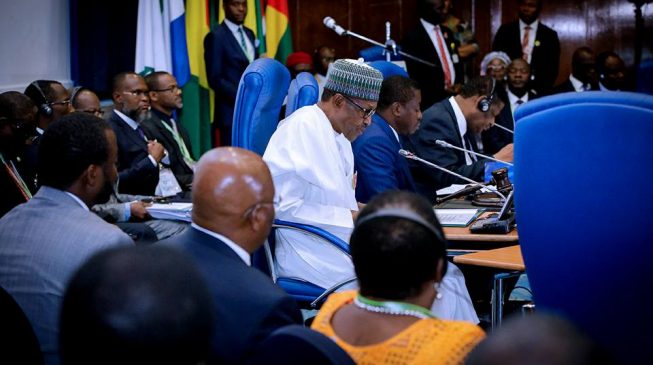 A report by Economic Community of West African States (ECOWAS) says Nigeria has contributed more money to the commission than 13 other member states in the last 12 years.
According to NAN, statistics on payment of the community levy showed that between 2003 and 2015, Nigeria paid $710, 497,352, equivalent to 480, 355,205 West Africa units of account (UA).
The West Africa UA is the official nominal monetary unit of measure or currency used to represent the real value.
The document was presented by the commission as part of the status of the community report during a session of the ECOWAS parliament.
The highest paying country after Nigeria is Ghana which paid $327. 976 million.
According to the statistics, a total of $1. 736 billion was contributed within the period by all 15 member states, with Nigeria paying 40.9 per cent of the amount.
The report also disclosed that 13 other countries contributed a cumulative amount of $697. 947 in the same period.
The countries are Benin, Burkina Faso, Cabo Verde, Cote d’Ivoire, Guinea, Guinea Bissau, Gambia, Liberia, Mali, Niger, Senegal, Sierra Leone and Togo.
Out of the 13 countries mentioned, Guinea Bissau contributed the least amount of $3. 107 million followed by the Gambia with $11. 171 dollars and Cabo Verde with $12.879 million.
Within the period, Sierra Leone contributed $19. 632 million; Liberia $29. 988 million; Guinea $31. 101 million; Niger $37. 788 million; Togo $48. 961 million and Cote d’Ivoire $54. 173 million.
Benin Republic contributed a total of $76. 147 million; Mali paid $93. 538 million; Burkina Faso with $105. 278 million while Senegal paid $174. 177 million.
According to NAN, the budget for each financial year is met by the member states through their contributions to the community levy, a 0.5 percent tax imposed on goods from non-ECOWAS countries.
However, it was alleged that out of the 35 seats allocated to Nigeria in the parliament, many of the representatives are usually absent during plenary.
At the plenary in May 2018, only four members out of 35 were said to be present on the day Nigeria presented its country report.
Also, during its recent ongoing second ordinary session, less than 10 were present for the aforementioned presentation.
This absenteeism has reportedly drawn the attention of the bureau of parliament and other members who expressed displeasure at the attitude of the Nigerians.
Some representatives from Nigeria were said to have also admitted that the attitude had become worrisome and needed to be addressed.
Speaking with reporters after the presentation by Nigeria at the on-going session, Garba Shehu said it was time the leadership of the delegation intervened and deployed people who had time for parliament’s activities.