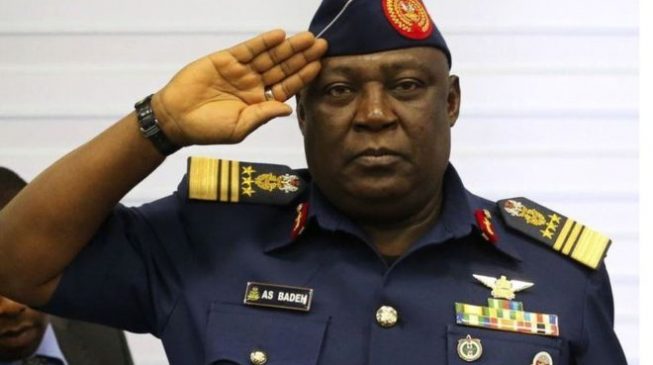 To everything, there is a season,
and a time to every purpose under the heaven,
a time to be born, a time to die…
Alex Sabundu Badeh was born into a family of peasant farmers in Vimtim, a little town in Mubi local government area of Adamawa state, on January 10, 1957. He attended Vimtim primary school and obtained his school certificate from Villanova Secondary School in 1976.
He then proceeded to the Nigerian Defence Academy (NDA) as a member of the 21 Regular Course in 1977. Badeh commenced his flying career at the 301 Flying Training School on the Bulldog Primary Trainer aircraft in 1979. Between 1981 and 1982, he attended the undergraduate pilot training at Vance Air Force Base in the US air force.
He holds an M.Sc. in strategic studies from the University of Ibadan.
CAREER 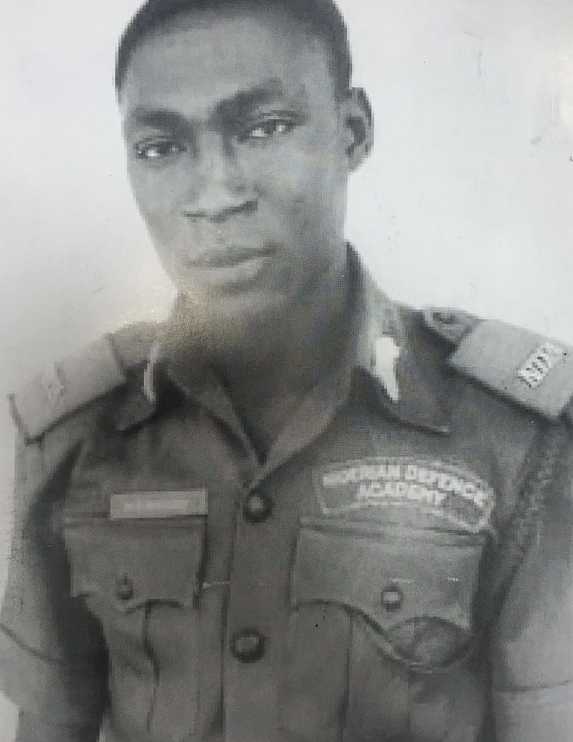 Young Badeh
In 2002, Badeh logged over 6000 flying hours. He was given the green light to fly former US Presidents Bill Clinton and Jimmy Carter on different occasions after an extensive check was done by the United States secret service.
Badeh eventually rose to the post of commander, presidential air fleet (PAF), under the administration of former president Olusegun Obasanjo. He served in the capacity between 2002 and 2004.
His professional dexterity on duty earned him commendation and an autographed pen from Koffi Anan, then UN secretary, after flying him to an official trip.
He also served, from October 2012 to April 2014, as the 18th chief of air staff. During this period, the air force launched a partnership with Nigerian Maritime Administration and Safety Agency (NIMASA) to curtail illegal maritime activities by providing aerial security support for the agency — an operation that was hugely successful.
As chief of air staff, Badeh ensured all personnel who had children in the air force primary and secondary schools got free tuition. 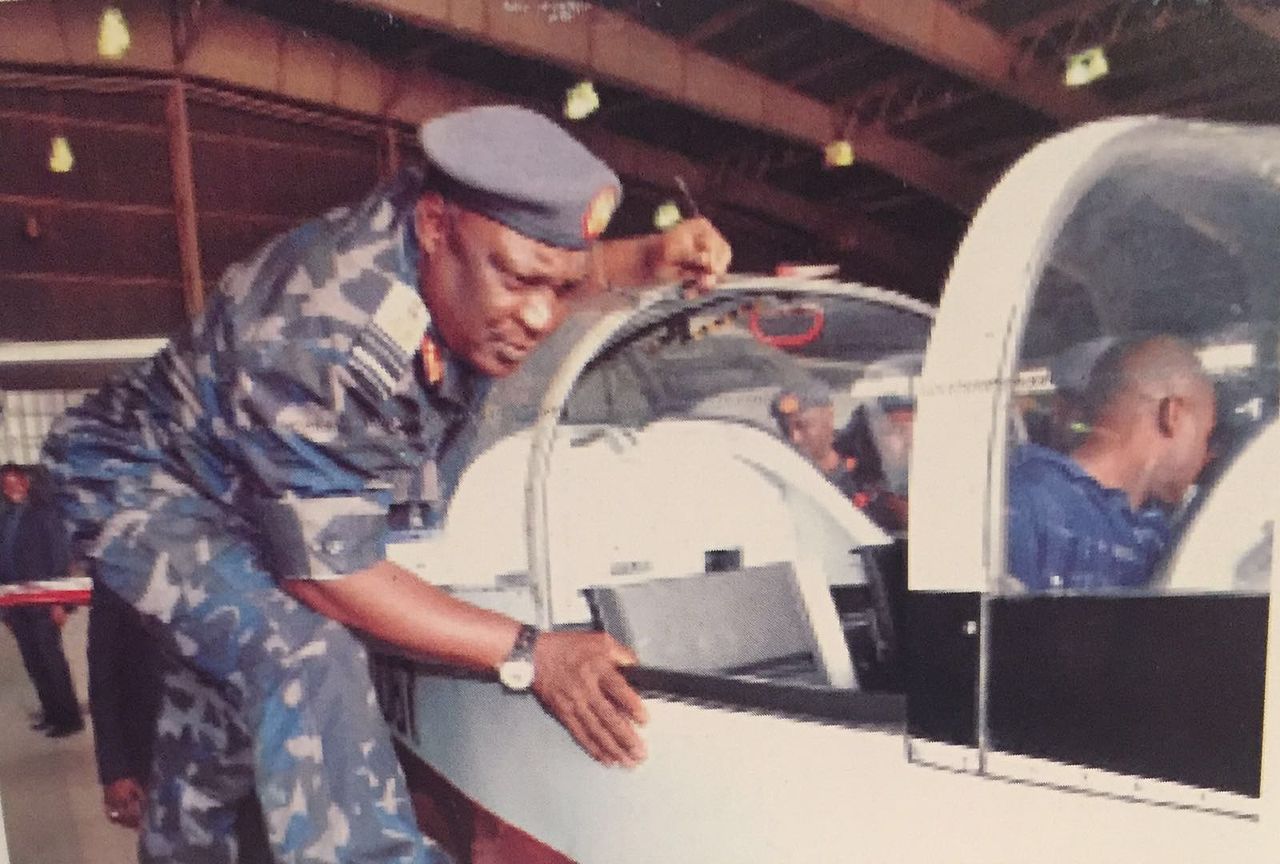 From April 2014 to July 2015, Badeh served as the 15th chief of defence staff. During the military operations against terror in the north-east, there was a need to feed the public with accurate and timely news.
Consequently, he established the Armed Forces Radio broadcasting on 107.7 FM to tackle the challenge of negative media coverage against the Nigerian military.
The radio station enabled the military to tell its side of events, particularly regarding security orientation and information. 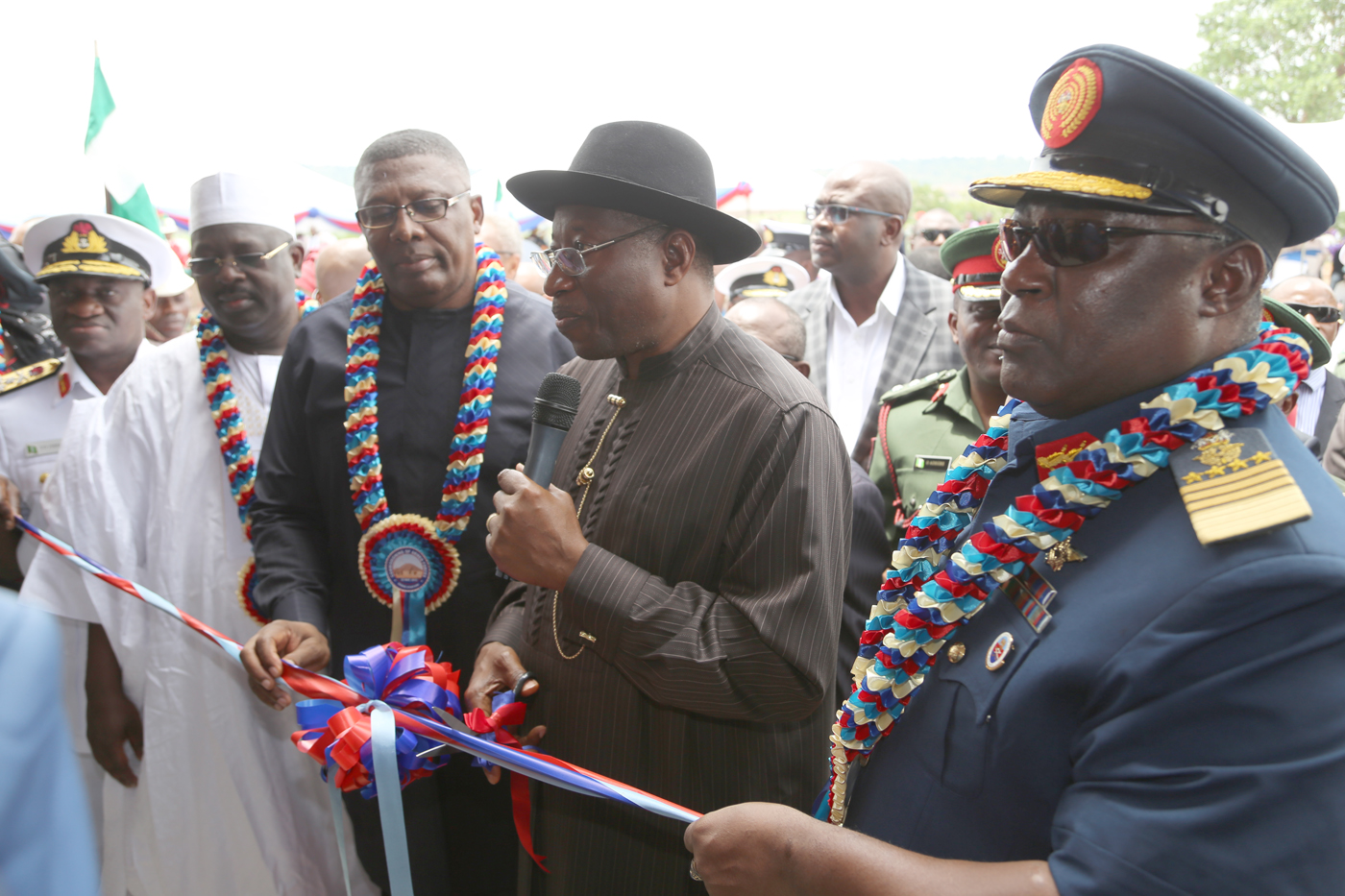 Defence minister of state Augustine Akobundu, president Goodluck Jonathan and the chief of defence staff, Alex Badeh, cmmission the Nigerian Army Radio Station at the Mogadishu Barrack, Abuja.
Other projects initiated by Badeh as chief of defence staff includes the armed forces DNA laboratory, which has allowed for easy identification of casualties of war, as well as the defence space agency.
CORRUPTION ALLEGATION 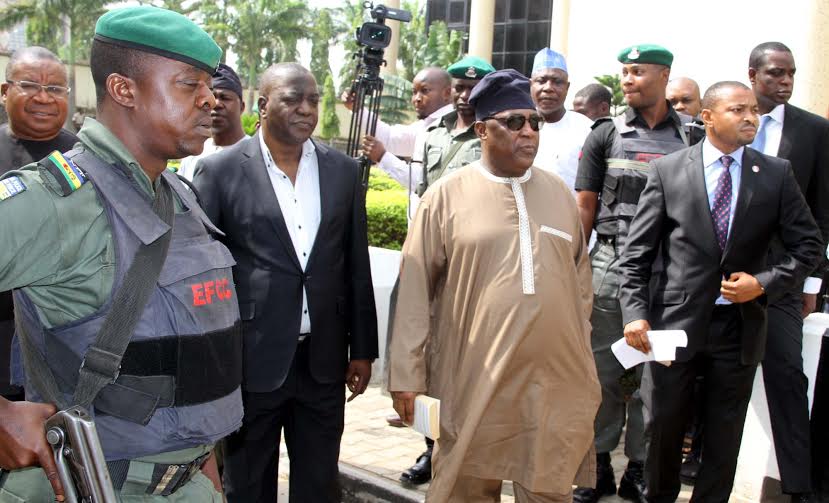 Badeh in court surrounded by EFCC operatives
After rising to the topmost military position in the land, Badeh’s name became soiled in a corruption scandal. He was first arraigned in 2015 on a 10-count charge bordering on criminal breach of trust, abuse of office and money laundering to the tune of N3.9 billion.
President Muhammadu Buhari had ordered the Economic and Financial Crimes Commission (EFCC) to probe him on the recommendation of the committee established to audit the procurement of arms and equipment in the armed forces from 2007 to 2015.
Read the alleged offences here.
During his trial, one of the prosecution witnesses had claimed that Badeh bought a N260m house at Wuse 2 for his first son, renovated it with N60m and furnished it with N90m. He also said that when Badeh’s second son turned down a property worth N340m, a second house had to be bought for N330m.
Badeh, who denied all the allegations levelled against him, was among those named in the’looters list’ and affected by the federal government’s travel ban.
‘A SOLDIER WITH A RIFLE IS NOT UNDER-EQUIPPED’ 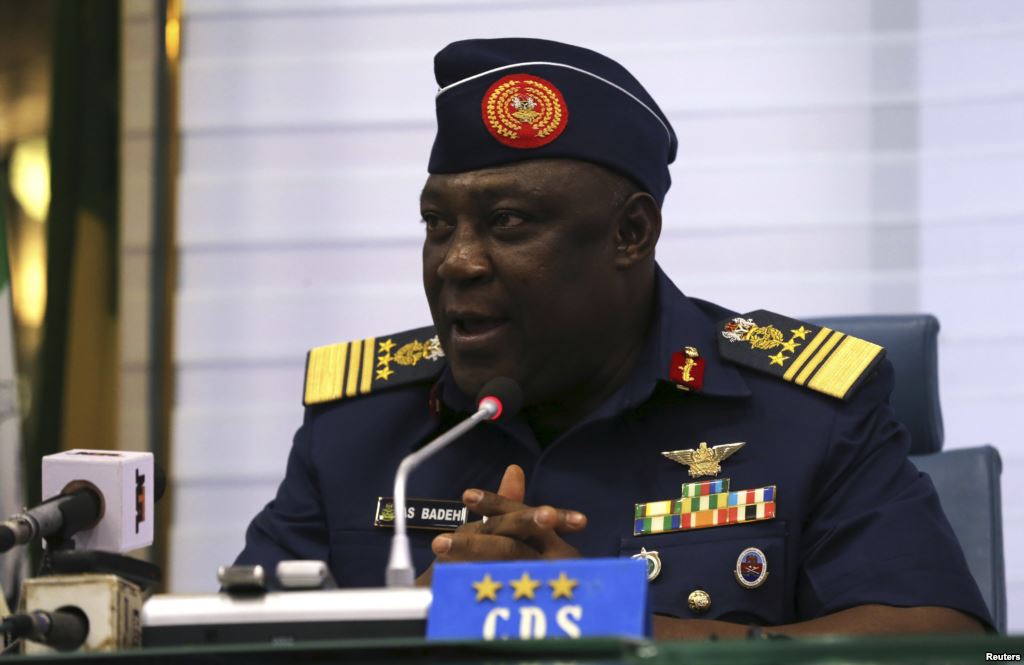 Badeh faced public criticism in 2015 when he said it was impossible for any Nigerian soldier to claim that he is inadequately equipped.
Responding to a question on the spate of mutiny in the army at the time, he had said: “The Nigerian military is very well taken care off. We live in houses we don’t pay accommodation for. We have buses that bring troops to work every day and take them back home. We don’t pay for light; we don’t pay for water.
“Our salaries are good compared with what is paid in the civil place. If someone with school certificate joins the army, by the time he is five years in the service, his salary has doubled that of a graduate. Why do you think Nigeria is doing that for us?
“Nigeria is doing that for us because we have vowed that we will defend our nation if need be with our blood. So for a soldier to come up and say ‘I’m not well equipped’ yet you have a rifle; what do you want? You want APC, you want tanks? The basic weapon of an infantryman is riffle, so why should there be mutiny? Why should you accuse your commander of leading you into an ambush? No commander will do that deliberately.”
HEADED AN INADEQUATELY EQUIPPED MILITARY 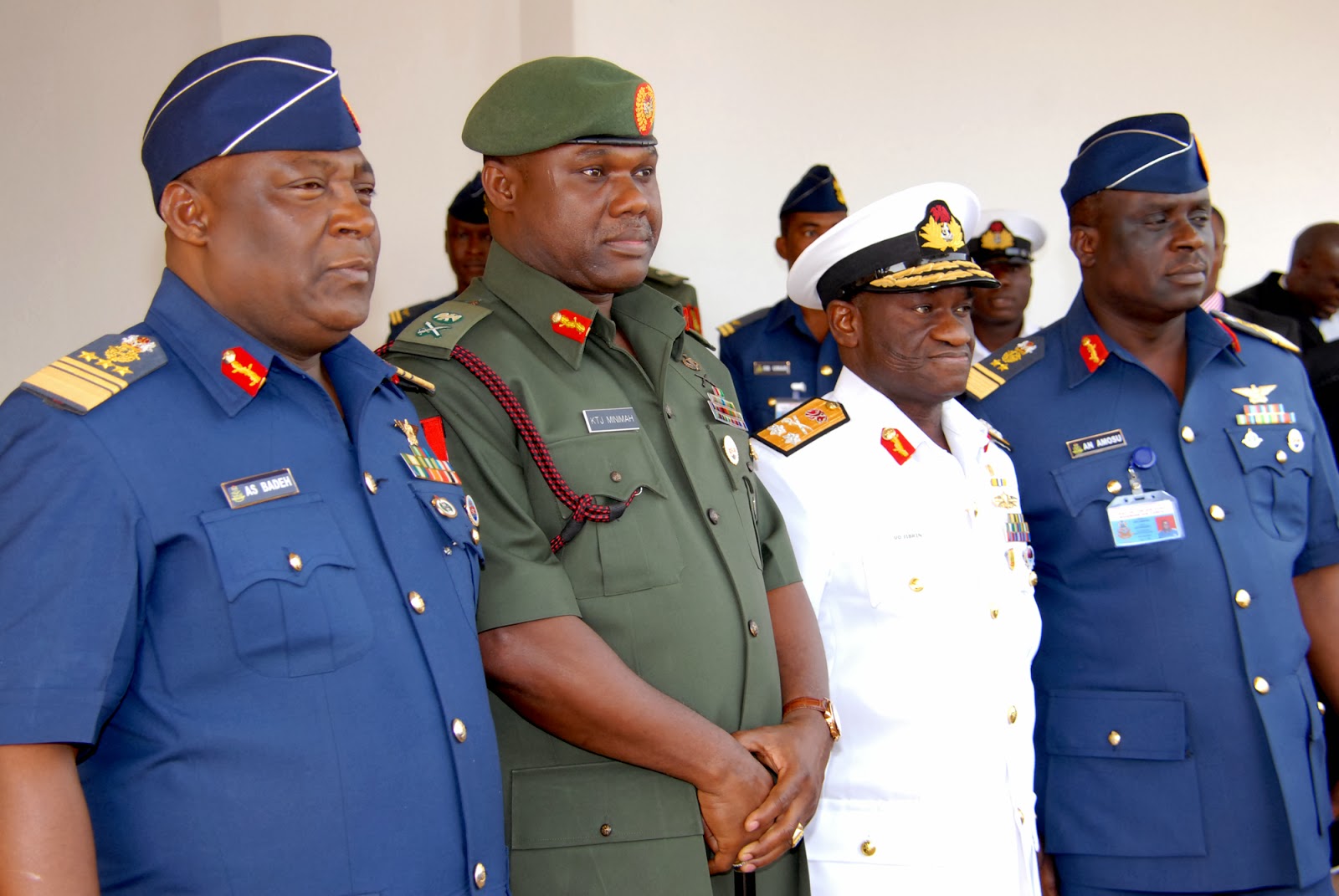 Badeh with the then service chiefs
Six months after saying a soldier cannot be said to be under-equipped, Badeh turned around to say he presided over an under-equipped military.
He claimed the armed forces under him lacked required equipment to prosecute the war against Boko Haram insurgents.
He described his tenure as the chief of defence staff as the most “complex and challenging assignment I have had in my over 38 years in service”.
Badeh bade farewell to life on Tuesday from gunshot wounds when suspected gunmen attacked him along Abuja-Keffi road while he was returning from his farm.