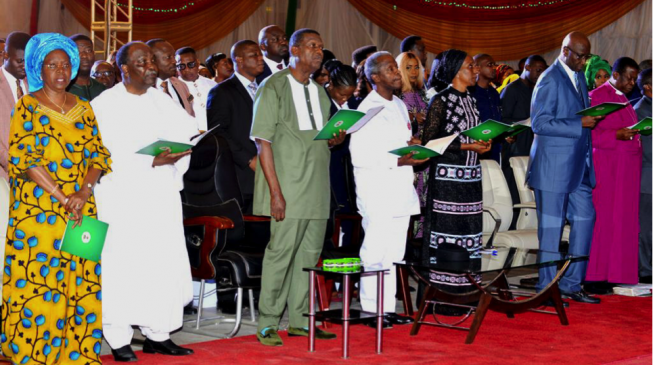 Vice-President Yemi Osinbajo; former head of state, Yakubu Gowon; and pastor Enoch Adeboye, general overseer, Redeemed Christian Church of God, were among hundreds of worshippers at the 2018 presidential Christmas carol on Thursday.
Also in attendance were the wife of the Vice-President, Dolapo Osinbajo, Boss Mustapha, secretary to the government of the federation (SGF), state governors, ministers and member of the diplomatic corps.
The first Bible reading taken from Luke 2:18 –18, was read by Victoria Gowon while the second reading from Isaiah 7:14–15, 9:6–7, was read by Emmanuel Udom, governor of Akwa Ibom. The gospel lesson taken from Luke 2: 1–7 was read by the SGF.
In a special intercession prayer, Seyi Malomo, chaplain, State House Chapel, prayed for Nigeria and its leaders especially, President Muhammadu Buhari, who will mark his birthday on Sunday, December 16.
Various choir groups, among them Aguda House Choir, Aso Villa Chapel Choir, Aso Villa Chapel Children Choir, Plateau Unity Choir and Praise Chorale, Lagos and the School for the Blind, which got standing ovation thrilled the house.
On a night people with disability were accorded due respect, the visually impaired read a Bible lesson, which a group, The Endless Praise Team, sang carols.
In his Christmas message, Adeboye thanked God for peace in Nigeria and prayed God to continue to protect the nation and bring lasting peace to it.
He started his sermon in a rather unusual manner with a joke on how some people corrupt their names to make them sound chic.
He said Jesus had many names but they all reflected His being and essence. Referring to the Bible, he said when Jesus told His disciples, “I am the way and the truth and the life.”
Explaining what Jesus as the Way means, he said Jesus is the way to freedom from bondage and intractable challenges of life.
“Some people feel they are free, but they are not because they have problems money and science cannot solve. Jesus is the way out of problems and sorrow,” he said, and backed that with examples from the Bible and testimonies.
He said: “Years ago, I was invited by some eminent personalities to preach in one of the secluded areas in Ikoyi, Lagos. While the people were getting ready, they asked me to wait in the living room.
“I am talking of one of those places where the moment you enter the gate, you will forget that you are in Nigeria.
Everything there was so beautiful. I noticed there were five various sitting rooms, with each one of them leading to the other in an ascending order of splendour. I have seen houses but this one was really beautiful.
“I was going to talk on a topic, “God of Miracles,” but with what I saw, I wondered if I shouldn’t change it to something like, “Oh that Ye Might Praise the Lord.”
But the Almighty God spoke to me: “This family in particular needs a miracle desperately.”
“Later on, I discovered that the lady of that beautiful house had one son who was a drug addict. Not only was he on drugs, if his mother refused to give him money for drugs, he would plant drugs in her luggage when she was travelling abroad. It does not matter how much money you have, if your only son is on drugs, you would not know what is called joy. Well, we prayed a simple prayer in the end and the son left drugs.” 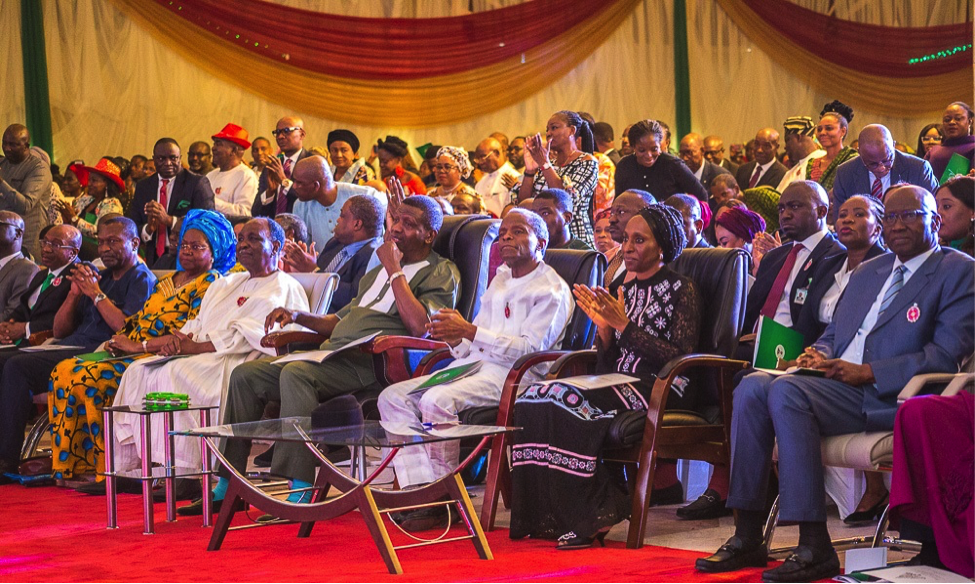 Continuing on what the name Jesus the way means, he said it signifies the way forward and upwards out of stagnation and for promotion.
He concluded by saying Jesus is the way where there is no way; when everything looks hopeless, when all human efforts have failed and one is helpless. He illustrated it with the case of a prostate cancer patient whose case had been declared hopeless by doctors oversees.
He recalled: “One of my sons was diagnosed of cancer, and his PSA, (the prostate specific antigen test that is used to help detect prostate cancer), was so high that his case was classified as terminal cancer.
“In that hospital, people with such bad cases were kept in a special ward. That was where my son was also kept. As God would have it, I was visiting that country at that time. I got to the airport only to discover that my son was not among those to welcome me.
“When I asked for him, they said he was at the hospital so I went there to pray for him. It was in one of those European countries where you can’t pray for anyone unless it is requested for. So I prayed for only my son and left. It was a Saturday. To cut a long story short, by Wednesday of the following week, they discharged him, completely healed.
“The bigger miracle was that everybody in the ward was discharged the same day. When the Almighty God went there to heal him, the atmosphere was so charged that He healed everybody else.”
The event was closed with a prayer by Primate of All Nigeria (Anglican Communion), Most Rev. Nicholas Oko.


But the “Hallelujah Chorus” and the Christmas Song (We wish you a Merry Christmas” that followed were so beautifully rendered by all the choristers that some people stayed back to enjoy them as others poured into the night.