Osinbajo to Yoruba: Support Buhari’s re-election bid, get presidency in 2023 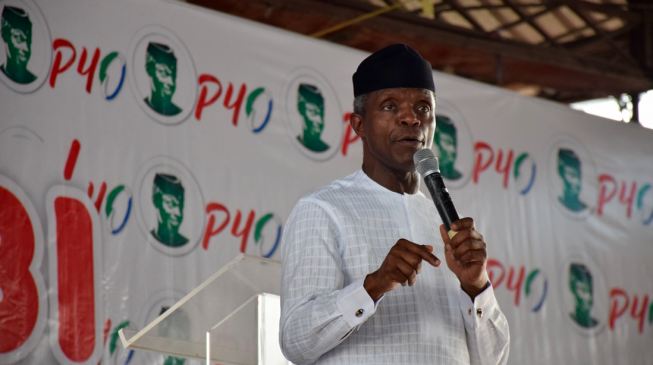 Vice-President Yemi Osinbajo has urged the Yoruba to support President Muhammadu Buhari’s re-election bid in other to have a chance at the presidency come 2023.

Osinbajo made the remark when he visited the palace of Lamidi Adeyemi 111, the Alaafin of Oyo, on Saturday.

Buhari’s main challenger in the 2019 elections, Atiku Abubakar of the Peoples Democratic Party (PDP), had been endorsed by some leaders of the Igbo who are also eyeing the presidency in 2023.

According to Osinbajo, if Buhari fails to secure a second term, it “may take a very long time” for a Yoruba man to become president.

He added that Buhari has recorded successes in various sectors including fighting corruption which he said the PDP is known for.

The vice-president said: “Now, they (PDP) are regrouping. These are the people that have ruled for 16 years and they say they want to come back again. They are corrupt. Though, it is still difficult because no man or woman can build a house without a foundation.”