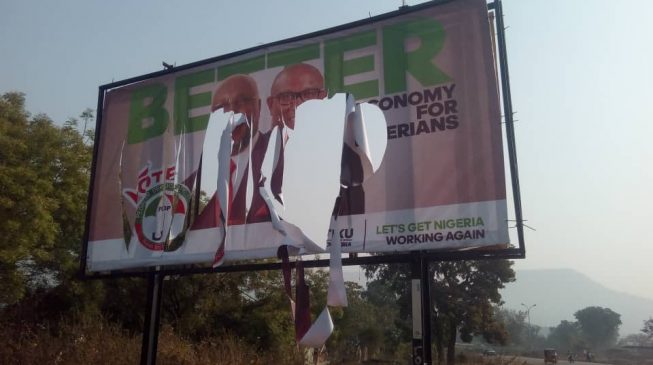 Some billboards and other campaign materials of Atiku Abubakar, presidential candidate of the Peoples Democratic Party (PDP), have been destroyed in Lokoja, Kogi state capital.

The destruction also took place across the there senatorial zones of the state.

Austin Usman, head of media and publicity of the PDP-Presidential Campaign Council (PDP-PCCO) in Kogi, said some persons suspected to be supporters of the All Progressives Congress (APC) were behind the act,

Usman also accused the Kogi state government of launching a covert team to destroy publicity materials of the opposition party.

“Information at our disposal clearly indicate that the Kogi State government has commissioned and is funding a covert team solely for the purpose of destroying billboards mounted by the PDP across the state,” he said.

“Ordinarily, we will have ignored the report but we are constrained to take it seriously because the grand plan has kicked off, starting from Otokiti along the Army Barracks road and other parts of Koton Karfe express corridor all in Lokoja.

“Whereas the campaign council will only focus on issues and only important issues which will advance the cause of its candidate, perpetrators of the dastardly act must realize that no group has a monopoly of a capacity to embark on a campaign of calumny.

“We have maintained the narratives, we have remained focused on issues directly linked to unemployment, insecurity, inflation, poverty and the rising disquiet among the federating components which make up Nigeria. But it is only imperative for us to clearly let the APC and agents of the Kogi State government realize that their calculated attempt to stifle the campaign and mobilization efforts of the PDP by preventing our message of hope from penetrating the grassroots will be resisted by every legal means available to us as a group.

“The APC must realize that their resort to destruction of campaign billboards is an act synonymous with sheer cowardice being fallout of the inability of the ruling government in the state to provide the people with a standard of leadership and governance obtainable in states created at the same time with it. This is by no means the fault of the PDP which bequeathed a buoyant local economy, secured communities and a respected workforce to the accidental government of Yahaya Bello.

“In as much as we would wish to remain on the lane of reason, issues and constructive engagement, we will not be cowed or intimidated. If push comes to shove, we will show a clear capacity to take on the Kogi State government on a pedestal that is alien to it and its agents.

“While we call on the Nigeria Police Force and relevant security agencies to rise to the occasion and restrain the Kogi State Government and its agents from threatening the peace of the state, we also call on traditional rulers, religious leaders and town unions to leverage their influence to and sell the message of peace to their subjects, followers and members.”

TheCable was unable to reach Kingsley Fanwo, spokesman of Yahaya Bello, governor of Kogi, for comments.