PDP to Kashamu: You are a clown on a journey to nowhere 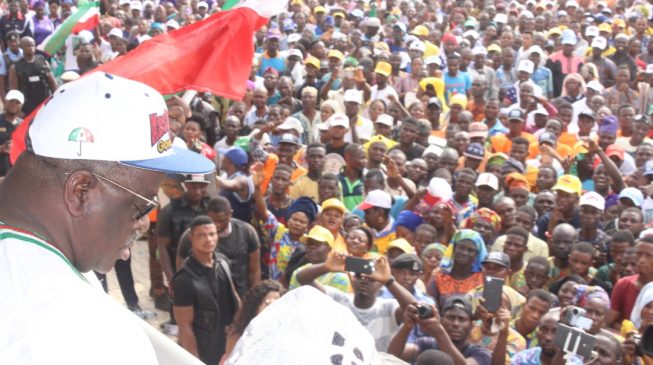 The Peoples Democratic Party (PDP) has described Buruji Kashamu, a senator, as a clown for “parading himself” as the party’s governorship candidate in Ogun state.
The leadership of the PDP had submitted the name of Ladi Adebutu, Kashamu’s rival, to the Independent National Electoral Commission (INEC) as its candidate.
But Kashamu’s faction has continued its campaign, despite the fact that the party’s leadership objected to his candidacy.
On Monday, the faction presented him as the Ogun PDP governorship candidate.
Reacting via a statement, Kola Ologbondiyan, PDP spokesman, said the party has pity for Kashamu for “finally turning himself into a clown, in his desperate bid to destabilize the PDP.”
The party accused him of working for the All Progressives Congress (APC) to “destabilise the PDP”.
“Senator Buruji, in his forced hallucination, has failed to realize that Nigerians, particularly the voters in Ogun State, have seen through his antics; they know that he is not the PDP governorship candidate in Ogun state; they know that he has a pact with the All Progressives Congress (APC) to destabilise the PDP; they also know that he is a clown on a journey to no where,” the statement read.
“Nigerians are aware that Senator Buruji never purchased PDP nomination form; never participated in our governorship primary or in any process related to nomination of governorship candidate of our party or any position whatsoever.
“Those using Senator Buruji as their agent have turned him into object of public ridicule, particularly in his charade of organizing a rally to hand a fake flag to himself.
“The PDP therefore urges the people of Ogun state to completely disregard Senator Buruji as a clown and continue in their support for the PDP governorship candidate, Ladi Adebutu, who is already coasting to victory.”