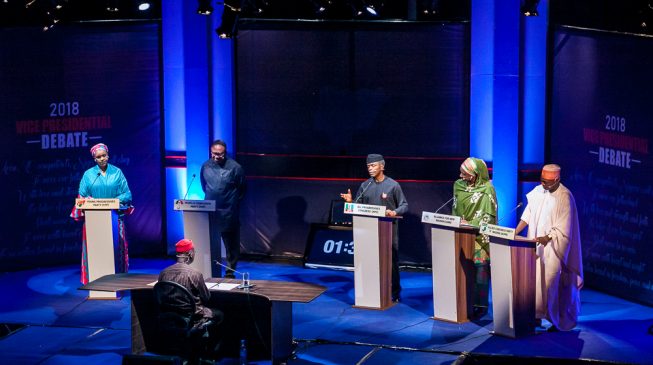 Peter Obi, vice-presidential candidate of the Peoples Democratic Party (PDP), says the federal government spends N5 daily on the healthcare of each citizen.
Obi said this on Friday during the vice-presidential debate organised by the Nigerian Elections Debate Group (NEDG) and the Broadcasting Organisations of Nigeria (BON).
The PDP candidate also accused the federal government of poor economic policies and outrageous payment in oil subsidy.
Taking on Yemi Osinbajo, vice-presidential candidate of the ruling All Progressives Congress (APC), Obi said the federal government has not been paying attention to developing the economy but wasting the little resources available.
“What we are subsiding today is inefficiency. If you get it right, the prices still come down. There is no way a country can have a budget of N340bn for health, which translates to N5 a day for (each of) its citizens, and then pay a trillion for subsidy,” Obi said.
“There is no way you can have an education budget, which is the most critical component of the development at over N400bn and you’re paying subsidy of a trillion. It is a waste. You need to reverse it because you’re not dealing with the engine that will drive your economy tomorrow.
“Why are you actually subsiding? Nigeria has one of the lowest car ownership in the world. It is 10 (cars) per 1,000 (citizens).
“So, we have only two million vehicles and you’re paying almost a trillion when you have 87 million people that are poor. You can’t do that. You need to reverse it and, I can tell you, if you do the right things, the price will come down.
“You are just paying for the delay in importation, the number of time cargos stay in the ports and so on. We can’t continue to pay for inefficiency in this country. I can tell that if you can remove it and do the right things, the price of petroleum will come down.”
TheCable fact checked Obi’s claim on the number of vehicles and found it incorrect. There are over 11 million vehicles in Nigeria.