RCCG CONGRESS 2018: The one-hour prayer, Miracle handkerchiefs, Glory ahead and the warning against sharing God's glory 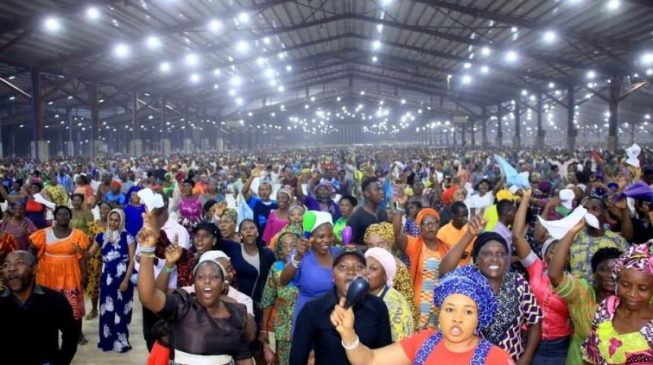 Millions of people from around the world packed the two auditoriums at the Redemption Camp of the Redeemed Christian Church of God and hundreds of viewing centres as the 2018 Holy Ghost Congress climaxed on Friday.

The church is in 197 countries from where people, the faithful who couldn’t make it to the camp, participated in the congress from viewing centres. Considering the sitting capacity of the old auditorium and the new three-kilometre-by-three-kilometre auditorium, no fewer than six million people may have attended the event which went deep into Saturday morning.

Everywhere one looked on the Redemption Camp there were streams and seas of heads. 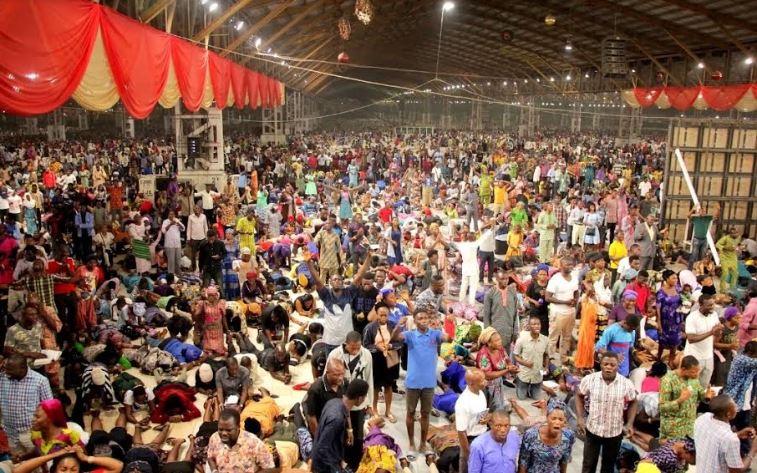 For those seeking miracles, the hosting of such mammoth crowds without an incident should probably be the first. The second should be the church’s ability to feed and accommodate a large part of the congregation free of charge.

But there were also turn-around miracles as some happy couples gladly testified to God’s intervention after many years of barrenness, some as long as 20 years after marriage; and the use of handkerchiefs, anointed by pastor Enoch Adeboye, to heal various diseases including cancer.

On such occasions, the congregation expects Adeboye to pray for them because of the proven efficacy of his prayers and also to anoint mantles for them.

The expectations reached a feverish pitch when he announced his encounter with God on Thursday night.

According to him, he had prayed for God to do him a special favour; something special during Friday’s plenary and got the assurance that He would focus specially for an hour on the congress during the congregational prayer session. 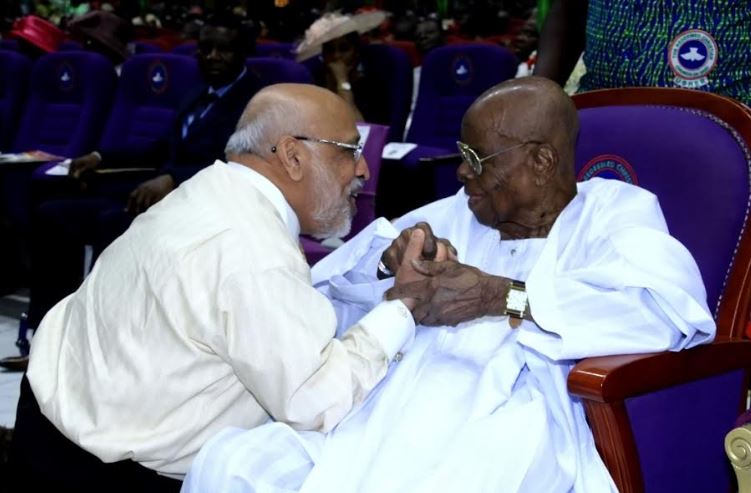 After his sermon, he announced the beginning of the special hour. He had told the congregation: “We are to pray for one hour. If you like within that one hour fall asleep. An opportunity like this might never come again. I will not go back to God for this kind of opportunity.

“If I were you, all those things I have asked from God that have not been granted, I will present all of them to God; If I were you, I won’t ask for a small thing.

“I will be asking God: Don’t let my sun set in the afternoon. Anoint me afresh, and let me be one of your favourites. Put an end to my sorrow.

“I am not going to tell you what you are going to ask for the one hour. Go ahead, your one hour begins now.”

Promptly, people rushed to the altar and all available spaces to pray, rendering the air with various voices.

For one solid hour, the congregation prayed, some people in standing position or on their knees, while some sprawled on the floor. 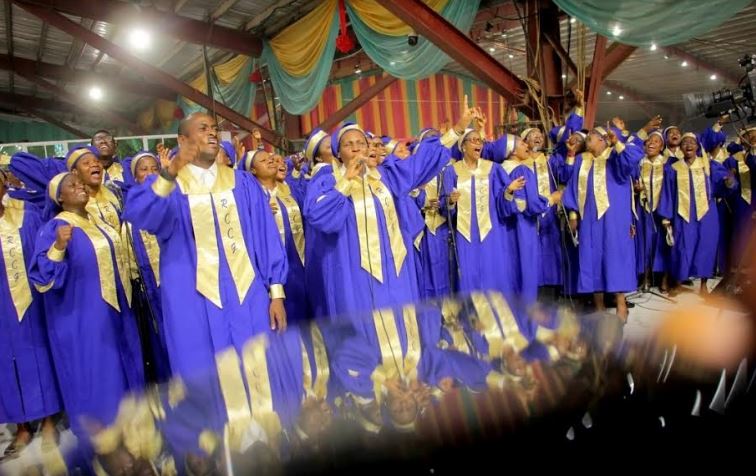 At the end of the hour, Pastor Adeboye sealed the prayers with his and proceeded to anoint the mantles.

“Because of these incredible testimonies, I have made up my mind to be anointing your handkerchiefs, clothes, shoes, everyone on every special occasion.”

He asked people to sing their choice of praise songs and wave the items they wanted to be anointed as he sang his own praise song and prayed. The sea of heads in the auditoriums turned into a white roaring sea of handkerchiefs.

The general overseer who never misses an opportunity to win souls would not miss Friday’s, except that he didn’t do it himself.

Reverend Joe Olaiya, who preached earlier that night on how sin affects God’s response to our prayers, made the altar call and many people rushed to the altars in both auditoriums. 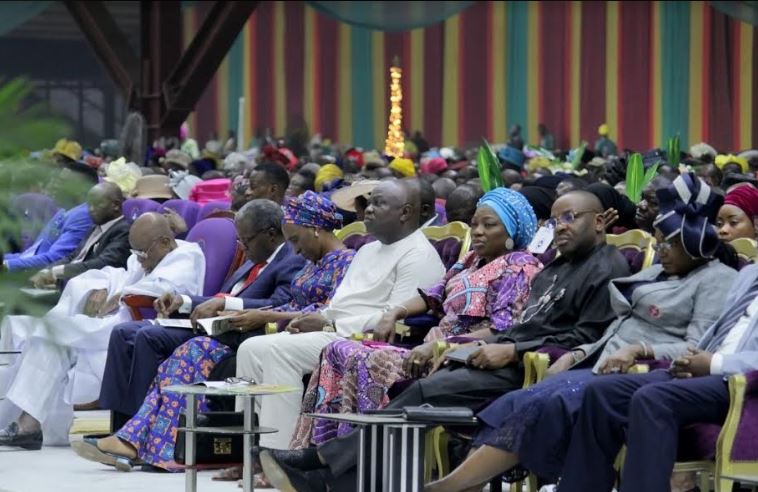 In the sermon, Olaiya reminded the listeners that “the Lord’s hand is not too short to save, and His ear is not too deaf to hear,” and advised that when fasting and prayers are ineffective, one should “look inwards and backwards” for reasons.

“Sin distances us from God and causes affliction,” he warned.

Another high point of the night was the congregational prayer for all nations, which was led by pastor Folu Adeboye, wife of the general overseer and one of the pillars of the church. She prayed particularly for bad aides and advisers around leaders to be removed.

In his own sermon for the night titled ‘The Glory Ahead’, which is also the theme of the congress, Adeboye defined glory as the opposite of shame, and that glory ahead is a prophetic saying symbolising a great future.

He said it generates hope, serves as an encouragement, and provides comfort.

He added that it could also mean the sun is about to rise; that if things are good, they are about to get better; stolen glory is about to be restored or one’s glory is going to get higher.

Rounding up, he urged the congregation to seek wisdom and be wise, and listed the expectations from the wise.

“Glory belongs to the wise. From now on be the wise. The wise shall inherit glory,” he said.

“Be wise, he that wins soul is wise; be wise, pay your vows; be wise, the fool says there is no God, and be wise because without faith it is impossible to please Him. Seek God diligently.” Before the sermon, he had dissociated himself from people selling branded items with the images of him and his wife.

He said: “It has been brought to my attention that some people are selling car keys and bracelets with my photograph and the photograph of my wife in it. May I appeal to you in the mighty name of Jesus; don’t buy them.

“If you have bought, throw them away. If you can see the sellers, report them to the police. I didn’t send them. I have nothing to do with them.

“What these people are doing can lead to serious trouble; not for them, but for me. God will never share His glory with any man. If at any time, God senses that a man is sharing His glory; that man is dead, but whether the devil likes it or not I am not dying yet.

“A woman bought one of the bracelets with my photograph and gave it to her child. You know children, anything they see they will put in their mouth. When the mother wanted to take it; she saw my picture was opened and the picture of prophet T.B Joshua was on the other side. You already know what that means. Please don’t cooperate with anyone who wants to kill me.”

The warning against sharing God’s glory

Adeboye, noted for his infectious humility, desists from self-adulation and avoids praise-singing for him. According to him, after the success of the very first Holy Ghost Congress, he had had an encounter with God at the Redemption Camp during which he was warned sternly against sharing in God’s glory.

He recalls in one of his testimonies in the book, ‘The Stories of Pastor E.A. Adeboye’: “Something happened after Lekki 98; one of the biggest programmes that we ever had. The whole of Lagos was paralyzed because of the programme.

“People walked kilometres to the venue and back. Fortunately, the programme was also transmitted by radio, so those who couldn’t get there listened to it on their radio. It was a fantastic programme. 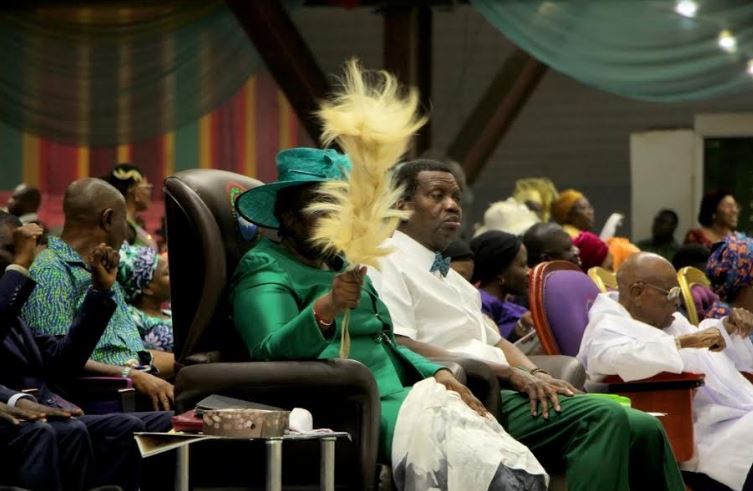 “After the programme, I returned to the Redemption Camp and soon proceeded to thank God: “God I bless Your Holy name, what a wonderful thing, etc.”

“I bent down quickly because, you know, I was in the jungle. You never can tell; a witch could have been flying past.

“And then he said, ‘Draw the figure of a man on the sand.’

“I drew the figure of a man: zero for the head, one line for the body and two lines for the leg and so on. You know that kind of drawing.

“I did, but by then I was afraid because I knew something serious was happening.

“He said, ‘Wipe out the figure you have drawn with your leg.’

“And He said, ‘Son, if you ever forget who your boss is, I will wipe you out. Nobody will even remember you came to the world.’

“That was what He told me. So, I smile when I hear people say, ‘He’s a very humble man. How can a man be so successful and be so humble?’

“You think I want to be wiped out?

“When you allow pride to creep into your life, you know what you are asking for? “To be wiped out”.

“The congress which continued on Saturday with an anointing service ends today with a thanksgiving.”