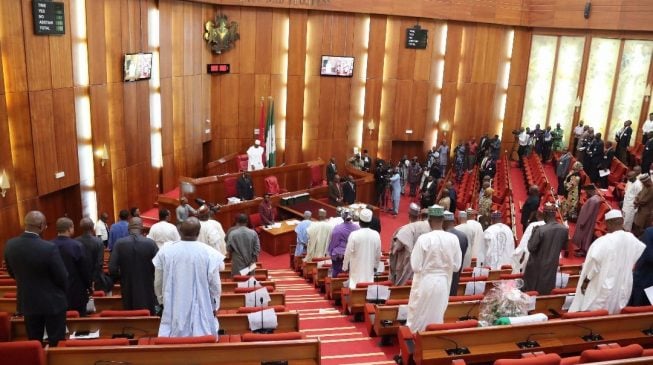 There was a rowdy session at the senate on Tuesday, making the upper legislative chamber to postpone the confirmation of some nominees of the Economic and Financial Crimes Commission (EFCC).
Chukwuka Utazi, chairman of the senate committee on anti-corruption, had presented a report on the screening of the nominees by his committee..
The committee had recommended that the senate confirm Ndasule Moses, Lawan Mamman, Galadanci Najib and Adeleke Rafiu as members of the EFCC.
But senators from the southern part of the country protested.
Speaking after the anti-corruption chairman presented his report, Victor Umeh, senator representing Anambra central, said the nominees should not be confirmed because the south-east and south-south were excluded.
“The south-south and south-east are not accommodated in the commission. On the issue of the fight against corruption – it involves all parts of Nigeria,” Umeh said.
“If you look at the composition, Mr President some people will think that the fight against corruption is instituted against them. There is need to take people from other geo-political zones.”
He noted that Ibrahim Magu, acting chairman of the commission; and Olanipkekun Olukoyede, secretary of the commission, are from the north-east and south-west respectively.
The senator said the four nominees to be confirmed are neither from the south-south or south-east.
Responding, Utazi said a committee set up to look at the president’s alleged lopsided appointments had “gone underground and refused to present a report”.
Also, Enyinnaya Abaribe, senator representing Abia south, said the consideration of the nominees should be stepped down until it is amended.
Ali Ndume, senator representing Borno south, said Utazi should have drawn the attention of the senate leadership to the matter instead of bringing a report urging them to confirm the nominees.
At this point, both Utazi and Isah Misau, senator representing Bauchi central, interrupted Ndume.
“We must not divide Nigeria,” Misau said. While Utazi was heard saying: “I have the floor, go and sit down.”
“You have a rowdy floor,” another senator said.
The disorderliness went on for about 10 minutes before and this prompted the lawmakers to go into a closed-door session abruptly.
When they emerged from the closed-door session, Senate President Bukola Saraki announced that it had been agreed that the confirmation of the EFCC and Independent Corrupt Practices and Other Related Offences Commission (ICPC) nominees should be suspended for further legislative input.