Sanwo-Olu: I set up Nigeria’s first pension commission… get it out of your blocked brains that I just appeared 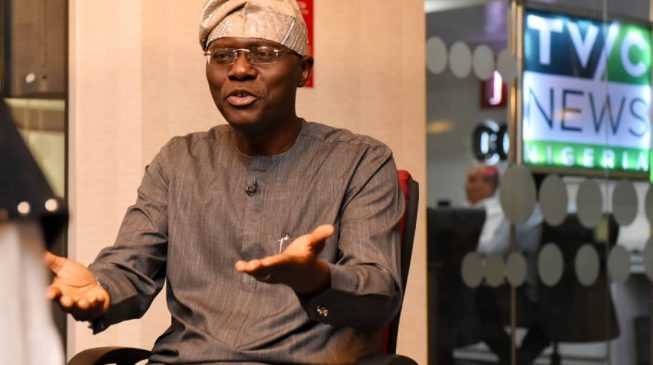 Babajide Sanwo-Olu, the All Progressives (APC) Candidate for Lagos Guber election, says people should get it out of their blocked brains that he came out from nowhere.
The former commissioner of establishment, training, and pensions, said he started the first pension commission anywhere in Nigeria, stating that he had always been in the system.
Sanwo-Olu, who said he has 30 years of postgraduate experience adds that he worked in the private sector for 17 years and the public sector for 13 years.
Clearing the air on his controversial emergence as governorship candidate in Lagos, Sanwo-Olu told Channels TV that those complaining can’t cry more than the bereaved.
“I really don’t know what controversy you are talking about. You cannot cry more than the bereaved. You cannot start a race until when INEC say you start the race,” Sanwo-Olu said.
“You can not start an agenda of politics if the right atmosphere is not ripe. There is no need for me raising my hand two-three years ago, if there is no vacancy, if there is no means, if there is no time that says that this is time for you to start.
“It was when they said we should start that I started. It is just that all of us need to take it out of our blocked brains that if you don’t know somebody and you now know somebody, you would be wondering where does this guy appear from?
“I have always been there. I have done a lot of firsts, firsts, first, which are not directly attributable to me but which we need to bring out now.”

The APC candidate went on to reel out his achievements including the set up of Lagos Pension Commission and LAGBUS.
“I was the one that set up the security trust fund, a lot of people don’t know that The first tenure of BRF, within the first two months, with all of the contacts I have in the private sector, we got all of the bank MDs, we raised over 260 vehicles in the first six months,” he added.
“I ran the security trust fund before my dear uncle, Makanjuola, became the chairman, I brought out the blueprint.
“Secondly, I started LAGBUS, I registered LAGBUS, I wasn’t commissioner of transport. We went to Cairo, we did a 200-bus procurement off-balance sheet, meaning that without any recourse to government.
“I started the first pension commission in this country, even before the federal government started their own commission. I paid the person that paid the first N18,000 minimum wage before even the federal government paid theirs.”