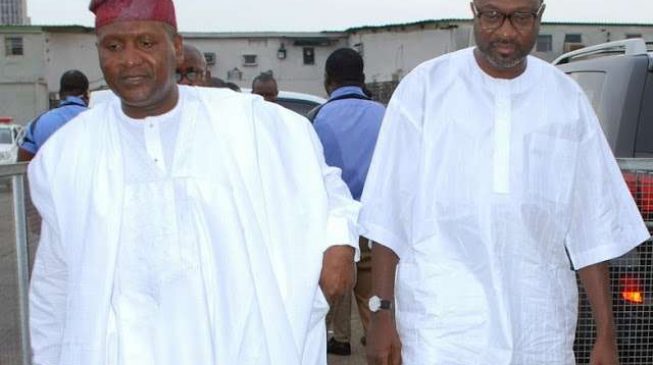 Aliko Dangote, Africa’s richest man, Femi Otedola, billionaire businessman and Bola Tinubu, a national leader of the All Progressives Congress (APC), have been named members of the ruling party’s presidential campaign council for the 2019 elections.
Femi Adesina, presidential spokesman, disclosed this in a statement issued on Friday.
The council made up of at least 70 individuals.
It is co-chaired by Buhari and Tinubu,with Vice-President Yemi Osinbajo and Adams Oshiomhole, APC national chairman, as deputy chairmen.
Rotimi Amaechi, minister of transportation, is still in charge as its director-general.
Also on the council are all serving and former governors and members of the national assembly in the party.
The ruling party will kick off its reelection campaign in Uyo, capital of Akwa Ibom state, in a few hours.
Below is the statement containing the full list of the council members:
APC ANNOUNCES MEMBERS OF  PRESIDENTIAL CAMPAIGN COUNCIL 2019

The All Progressives Congress, APC, has released the names ofmembers of its Presidential Campaign Council for the 2019 elections. They are as follows: