Tinubu hits Atiku: You have enough party membership cards to build a house 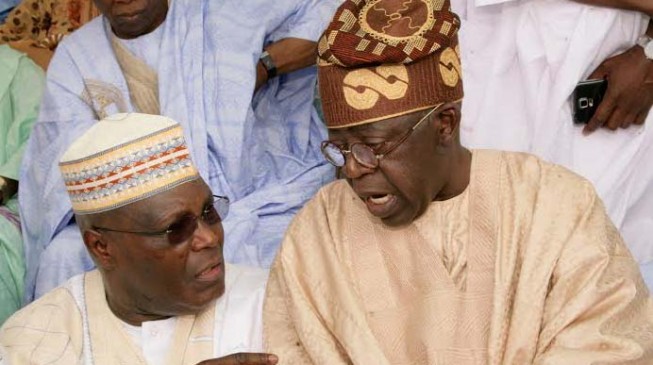 Bola Tinubu, chieftain of the All Progressives Congress (APC), has taken a swipe at Atiku Abubakar, presidential candidate of the Peoples Democratic Party (PDP), over his history of changing political parties.

Since he joined politics, Atiku has been a member of the APC, Social Democratic Party (SDP) and PDP.

Speaking on Tuesday at a national consultative forum organised by the national committee of Buhari Support Groups in Abuja, Tinubu said Atiku “has more party membership cards to build a house”.

The APC chieftain said: “I give you one message for them and there will be many such messages. Their candidate who is supposed to beat Buhari, has been in our party and many other parties. He has more party membership cards to build a house.

“All you have to do is to go out there and tell him that a house built on cards will be collapsed with a single stroke of broom. He said they are reformed, but reformed what? Reformed PDP. No. Tell them as you go out that we accept the admission of guilt that they were vagabonds before and now being reformed.

“But they have not served enough probation. You can only be reformed if you are an ex-convict, a drug addict or a political prostitute. It is because Buhari has no temperament and no tolerance for corruption, he is vigorously ridding the nation of blemish and looting, bad reputation.

“They are busy changing parties and that is why they are confused. Atiku is now PDP Aladdin. He is going to create 14 million jobs and I say how? They will turn Atlantic into fuel to crash the prices without the refineries working and the population is expanding and people must move around. He just talked of crashing the prices of fuel. They are lying again because a leopard cannot change its skin.

“They had 16 billion of unprecedented resources and yet, they didn’t bring power to Nigeria. They invested that money in their personal industries. They bought turbines from General Electric and did not add one pipeline to bring gas to the plant.

“They can say anything now about Buhari. I agree with Okonjo-Iweala that it is difficult to fight corruption. The agents of destruction are there fighting us, but We will win with strong determination.

“Don’t let them weep things under the carpet – that when we came in as a government, before then they had too much resources in their hands, but Buhari funded states to pay salaries. In that period, 27 states were unable to pay salaries as at May 2015. The states and local economy would have collapsed long time ago.

“If PDP members truly love this country, they should humbly step aside and allow Buhari continue with the work of addressing the ills of our nation. However, since they seem to obstruct and remain focused as applicants, we say no job for them.”

Tinubu said Nigerians will certainly re-elect Buhari in February 2019, noting that it is a task that must be achieved.

The former Lagos governor also criticised Senate President Bukola Saraki over his defection to the PDP, describing him as a dishonest person.

He said Saraki “used our mandate to negotiate and give lifeline to the opposition”.

Tinubu added: “How can he now ask us to vote for PDP? He left the PDP, joined us, got elected, got our mandate, our majority and sold it for a pot of pottage. God is honest; Saraki is not.”