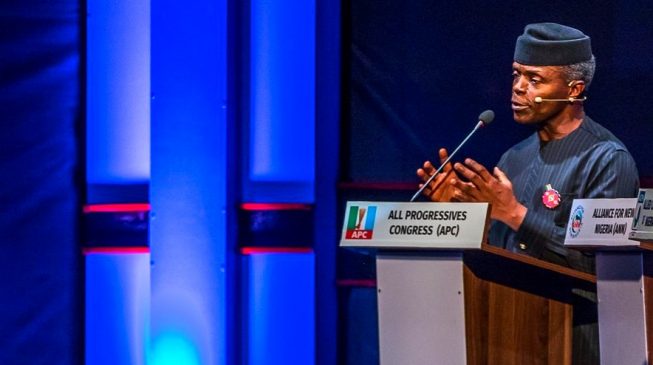 The Initiative to Save Democracy (ISD), a socio-political group, says the performance of Vice-President Yemi Osinbajo in Friday’s debate shows he is the best vice-president in the history of Nigeria.

The debate was organised by the Nigeria Elections Debate Group (NEDG) and the Broadcasting Organisations of Nigeria (BON).

The group, in a statement by Sunday Akinloye, its president, said “Osinbajo riveted his class as the best Vice President in Nigeria’s history.”

“Stating categorically how the ruling government will take Nigerians to the next level when re-elected, Osinbajo noted that the government will continue to build on infrastructure and human capital development,” the statement read.

“The Vice President drew the biggest cheer of the debate when he replied Peter Obi, the Vice Presidential candidate of the PDP insinuated that the ruling All Progressives Congress had left its shop and was chasing thieves.

“In response, Prof Osinbajo said, “If you allow criminals to steal all the inventories in the shop, there will be no shop. That’s the problem and the World Bank said that corruption is the major impediment to Nigeria’s development.”