Wigwe: Diamond Bank to write off non-performing loans before merger 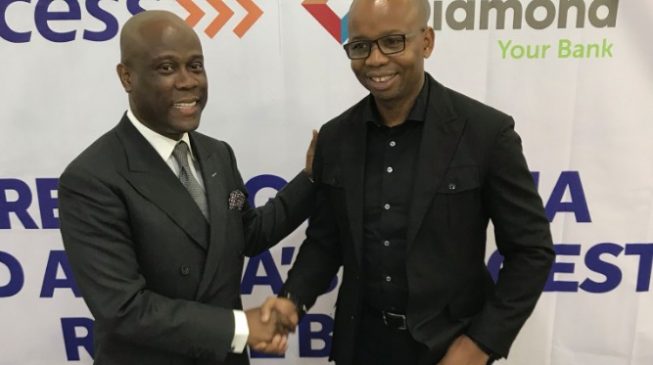 Herbert Wigwe, group managing director of Access Bank Plc, says Diamond Bank is determined to write off its non-performing loans before the merger is finalised.
Speaking in an interview on Thursday, Wigwe said this action is necessary to protect the health of the new entity.
“We are fully cognizant of all of those things, and one of the things we are doing is that Diamond Bank is determined to write off all of those loans before the date of the legal merger,” he said in an interview on Arise TV.
“They would do so on December 31 and whatever the residue is from next year, that solves that problem permanently.
“So, we have enough capital to support the enlarged franchise which is important. Now all the benefits of recovering bad loans now become a plus because we have cut out what becomes cancer and taken it out totally.
“So, we have a fresh, clean brand new franchise that is adequately capitalised. So, that concern people had of what is going to happen to the NPLs is taken out decisively and we have enough capital to go on.”
Wigwe said that there would be no job losses as Access Bank is planning to raise $250 million fresh tier II capital.
He also said the move to shore up the bank’s capital was to create a substantial capital adequacy ratio.
Speaking on the benefits of the merger, the Access Bank boss said customers will benefit from the expertise of both banks.
“The benefit of this merger is that we are going to keep all of those unique things about Diamond Bank. They have an incredible mobile banking application; they have a way of reaching the mass market; we must ensure that we keep that emotionally connect of that Diamond Bank’s retail customer which is very critical, so nothing would change,” he said.
“Together, what we have created has 29 million customers, which is more than any other institution on the continent. You can say that there might be some duplication and if you go through that and the margin of duplications is probably around two to three million. So, if you call it 25 million customers, it is still a very large size of customers.
“Those who did not get enough of what they wanted in Diamond Bank now have a larger platform and it remains a safe institution. And for staff, obviously I am communicating with everybody and we are not asking people to go, it is certainly not on the table.”