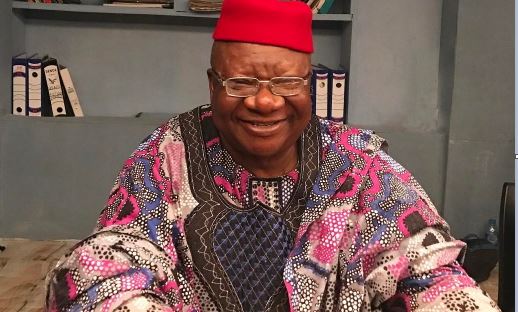 Chika ‘Zebrudaya’ Okpala, Nigerian veteran comedian, and actor Ali Nuhu have been honoured with the Rock of Fame Award.

They were recognised on Friday at the closing ceremony and award night of the 2018 Zuma Film Festival (ZUFF) in Abuja.

Hyginus Ekwuazi, former managing director of the Nigeria Film Corporation(NFC), and other veterans in the Nigerian motion picture industry were also named for the award.

Others are Vinzenz Hediger, professor of cinema studies at Goethe University in Frankfurt Germany, Spanish socialist politician, Maria  Fernandez Delavega and Stuart Symington, US ambassador to Nigeria, among others.

Late Sir Tafawa Balewa, Nigeria’s Prime Minister in the First Republic, was honoured posthumously for the epic film, ‘Shaihu Umar’, which was screened in Berlin, Germany and at the Cinematography Centre in Cairo, Egypt.

He said the recipients have contributed to the growth of Nollywood as it evolved over the years.

“This is our modest attempt in appreciating the enormous contributions of these film practitioners in the Nigeria film industry and their achievements thereof,” he said.

“They are today recognised as the first recipients of the Nigerian Film Society Rock of Fame Award, the highest professional recognition within the Nigeria Film industry based solely on merit.

“The labour of love and commitment to Nigeria’s development of our industry geniuses shall continually be recognised and rewarded, he said.

The Nigerian Film Society Rock of Fame Award, now in its second year of introduction, is the highest professional recognition within the Nigeria film industry based solely on merit.

Some of the recipient of the maiden edition in 2017 included late thespians Sam Loco-Efe, James Iroha, popularly known as ‘Giringori Akabogu’ ,who were honoured posthumously, among  other living veterans.