After ‘letter bomb’, Obasanjo and Buhari meet at council of state meeting 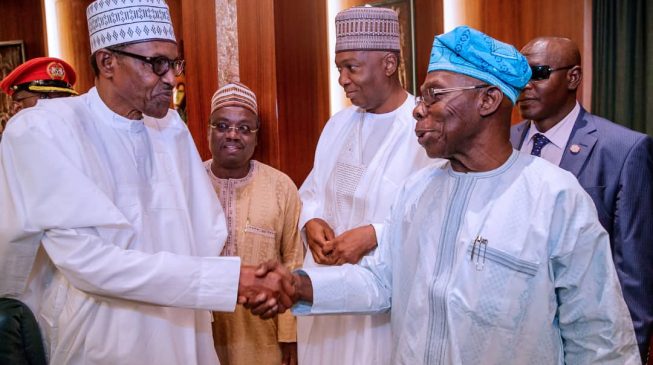 Former President Olusegun Obasanjo attended the council of state meeting at the presidential villa in Abuja on Tuesday.

Obasanjo gave the opening prayer at the meeting presided over by President Muhammadu Buhari.

The meeting comes in the wake of Obasanjo’s scathing letter, in which he accused the president of taking Nigeria back to the Sani Abacha era.

Obasanjo had said in the letter: “Today, another Abacha Era is here. The security institutions are being misused to fight all critics and opponents of Buhari and to derail our fledgling democracy. EFCC, Police and Code of Conduct Tribunal are also being equally misused to deal with those Buhari sees as enemies for criticising him or as those who may not do his bidding in manipulating election results.

“Criticism, choice and being different are inherent trade mark of democracy. If democracy is derailed or aborted, anarchy and authoritarianism will automatically follow.

“Today, as in the day of Abacha, Nigerians must rise up and do what they did in the time of Abacha. Churches and Mosques prayed. International community stood by us Nigerians. I was a beneficiary and my life was saved. Well-meaning Nigerians took appropriate actions and made sacrifices, some supreme.”

The former president also expressed “serious concern” over the integrity, impartiality and competence of the Independent National Electoral Commission (INEC) to conduct a credible election.

He also alleged that the All Progressives Congress (APC) intends to rig the 2019 general election.