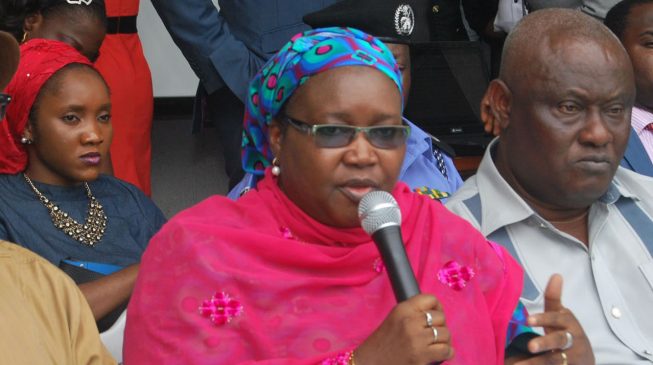 The family of Amina Zakari, a national commissioner at the Independent National Electoral Commision (INEC), has explained its ties to President Muhammadu Buhari.

The appointment of Zakari as head of INEC’s collation centre in the forthcoming general election has generated controversy.

The Peoples Democratic Party (PDP) had alleged that she is related to the president and her position would compromise the electoral process.

In a statement by Isah Zakari, the family described the rumours as “blatant lies and a campaign of calumny orchestrated to pull her down”.

It said contrary to widespread belief, Zakari is not a blood relation of the president.

“We ordinarily will not join issues with any political party, newspaper or media organization because we will not want to constitute an impediment to the discharge of their constitutionally guaranteed responsibilities. It is, therefore, a very tough decision to react to the blatant lies told against our mother, daughter and sister, Mrs. Amina Zakari,” the statement read.

“We have taken this decision in firm belief that this clarification will put to rest the ceaseless campaign of calumny orchestrated to pull her down.

“Amina Zakari is a patriotic Nigeria who has served her country faithfully and honestly for years without blemish. We are therefore pained by the report that portrays Amina Zakari working to sabotage INEC’s firm determination to advance the democratic journey by creating a conducive atmosphere for citizens to exercise their voting rights.

“Contrary to the widespread belief, Amina Zakari is not a blood relation of President Muhammadu Buhari. Her mother was from Daura (born and bred in Kano) and she was not Buhari’s sister. It’s also true that Buhari’s sister was once married into the family. The union was short lived and did not produce a child. This all happened well before Mrs. Zakari was born.

“Furthermore, Alhaji Tanko Yakasai, the veteran Kano politician who first made the claim that she was born by Buhari’s sister has since recanted. Those who have held on to the claim are therefore either unaware of his recantation or they are simply incapable of letting go their prejudices in the face of facts to the contrary.

“It is laughable that Mrs. Zakari who was appointed National Commissioner by former President Goodluck Jonathan under a PDP government can no longer perform any function in INEC because she is a supposed relation of President Muhammadu Buhari.

“The pieces of information being sold to the press about Mrs. Amina Zakari by the PDP are absolutely false, tendentious, malicious and highly reprehensible.”

The family said instead of celebrating Zakari as an election expert, her accomplishments are being reduced to “mere family ties”.

“She has now served under 3 different President’s in various capacities and has served her nation in a forthright and honest manner with the utmost humility and much sacrifice,” the statement read.

“She is one of the most accomplished election experts in Nigeria with 2 elections under her belt (2011,2015).

“What is unfortunate is instead of celebrating an accomplished woman to support diversity in our polity and groom our future female leaders, we are stuck on belittling Mrs. Zakari’s accomplishments to mere familial ties. If we begin to harangue and harass our officials for family ties (which they do not control) over competence we shall have no one to serve.

“Enough is enough leave our mother, daughter, sister alone to serve the nation as she has done so diligently over her life and career.”