APC to Ndigbo: Atiku will use and dump you 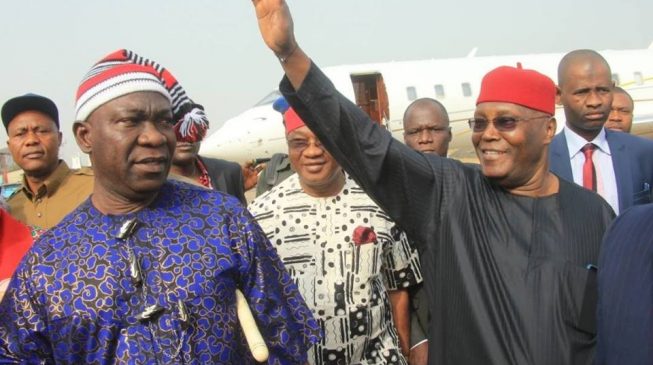 The All Progressives Congress (APC) says the Igbo will not gain anything if Atiku Abubakar, presidential candidate of the Peoples Democratic Party (PDP), is elected.

The ruling party said this in reaction to the endorsement of Atiku by Ohaneze Ndigbo.

The Anambra state government has since distanced itself from the endorsement of the PDP candidate.

Speaking with journalists on Friday at the party’s national secretariat in Abuja, Lanre Issa-Onilu, APC spokesman, said the ambition of the PDP candidate does not enjoy the support of most people of the south-east.

“With a few members of Ohaneze falling for Atiku’s antics, it has now become clear that the purported endorsement of Atiku’s presidential ambition does not enjoy the support of most of the Igbos,” Issa-Onilu said.

“One of such proofs is the statement by the Anambra state government’s dissociating the state from the dubious endorsement of Atiku contained in the equally disputed communique.

“It would now seem that few people in Ohaneze are trying to misrepresent the interest of the Ndigbo and we wonder whether these people are part of Atiku’s friends that he has promised to make rich as a cardinal policy of his government?

“Many questions beg for answers. Besides the deceitful restructuring promise, what else do the Igbo stand to gain from an Atiku presidency? Nothing!

The spokesman said Nigerians should be wary of “Atiku and his PDP ilk who in their desperate quest for power are ever ready to play fraudulent political games and parade themselves as ethnic champions to the gullible.”

“Atiku has refused to speak on the nature of the restructuring that he is cashing in on. But little wonder because he is transactional in nature. Atiku has no plan for this country and he is not pretending about it,” he said.

“He has said it clearly and on many occasions that he is seeking power to be able to sell off national assets to make his friends and himself rich. There is no doubt that Atiku only intends to use and dump the Igbo people.

“Ndigbo should not forget that it was during the administration of former President Olusegun Obasanjo and Atiku as vice that Nigeria’s political history witnessed the frequent manipulated changes to the Senate Presidency and setting of Igbo brothers against one another for political gains.

“Without playing to the gallery, the President Muhammadu Buhari-led APC administration has pursued a deliberate policy of probity, inclusive governance and national spread in the allocation of our national resources and developmental projects across the country.”

Issa-Onilu said the APC remains the most sincere political platform working to ensure better inclusion of all geo-political zones in the country.

“They have now regrouped to exploit the issue of restructuring in furtherance of their selfish political interests.”