Atiku departs US, heads to Abuja for presidential debate 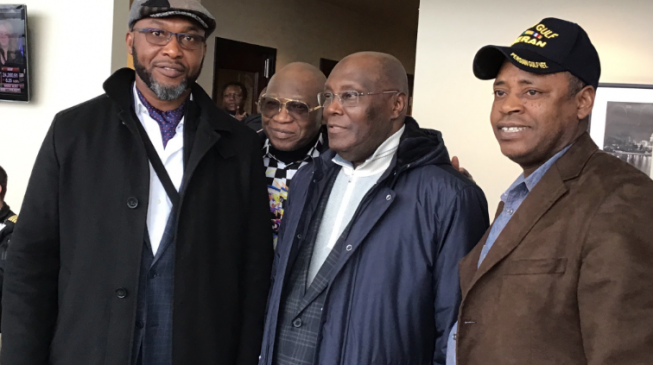 Atiku Abubakar, presidential candidate of the Peoples Democratic Party (PDP), has departed from the US after a two-day visit, TheCable understands.

He is expected to land in Abuja, the nation’s capital, in time for the televised presidential debate scheduled for 7pm Nigerian time.

The debate is between the leading presidential candidates. It is not clear if President Muhammadu Buhari, candidate of the All Progressives Congress (APC), will be in attendance.

Atiku left the US after holding a town hall meeting with Nigerians in Washington DC.

Lai Mohammed, minister of information, on Friday said Atiku will be grilled upon his return to the country.

The federal government has accused him of playing a part in the collapse of former Bank PHB.

Mohammed said there is evidence that Atiku benefitted N156 million from slush funds that led to the collapse of the bank.

“Any time Abubakar returns home, he has questions to answer following the fresh evidence that we have that he benefitted from slush funds that led to the collapse of the former Bank PHB,” he had said.

When Atiku returned from his Dubai trip in November 2018, operatives of the Department of State Services (DSS) searched his jet.

A combined security team of DSS operatives, officers of the Nigerian Immigration Service (NIS) and Nigeria Customs Service (NCS) had combed the jet allegedly in search of foreign currencies.