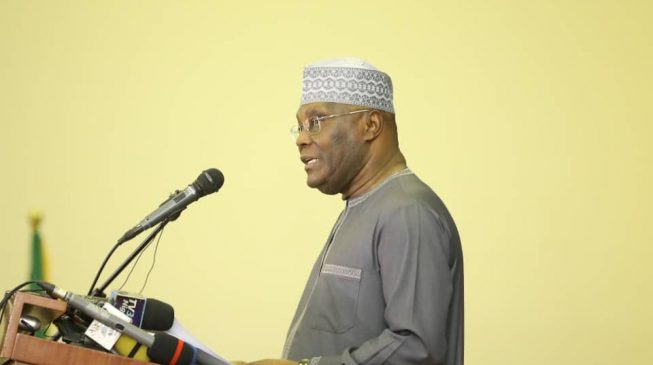 Atiku Abubakar, presidential candidate of the Peoples Democratic Party (PDP), has asked the international community to put pressure on President Muhamamdu Buhari to desist from “violating the constitution”.

In the letter addressed to ambassadors of France, Germany, United States and the United Kingdom high commissioner, Atiku accused the president of threatening the nation’s democracy.

He also appealed to Nigerians to vote out Buhari and elect a “true democrat” in next month’s election.

“I have chosen to write this letter to Your Excellency for the enviable role that your country plays as champion of Democracy and the Rule of Law,” the letter read in part.

“President Muhammadu Buhari is threatening our democracy by serially breaching the provisions of our constitution and undermining organs and institutions of State in order to advance his personal interest.

“As a Presidential Candidate in the forthcoming General Elections that will be conducted and supervised by the Government of President Muhammadu Buhari, I feel the urgent need to share with you some of these key violations of the provisions of our constitution and to demand that you pile pressure on the Federal Government to desist from these violations and ensure a level playing field for the General Elections that are only a couple of weeks away.

“The choices facing all of us is either to stand aside and watch Nigerians reelect a President who has been in constant violation of the laws of the land without remorse; or to show him the way out and elect a true democrat.”

Below are some of the “constitutional infractions” highlighted by the PDP presidential candidate.

Abubakar said the action of the president not only breaches the Nigerian constitution, but has also “managed to undermine presidential democracy by assaulting one of its hallowed doctrines of separation of powers”.

He described the action as the latest in a series of carefully planned onslaught on the nation’s democracy by “an extremely power hungry and anxious president and the cabal that feeds fat around him.

He alleged that the act is geared towards affecting the outcome of the presidential elections.

Illegal purchase of the Tucano Aircrafts

Abubakar said Buhari, in April 2018, approved the purchase of Tucano Aircrafts for the Nigerian military at the sum of $496 million, without seeking prior approval of the national assembly.

He said Buhari violated  section 80 (3) and (4) of the 1999 constitution (as amended) which states how the president can spend monies belonging to the federation.

Disregard for Orders of Courts

He cited the cases of Sambo Dasuki, former national security adviser (NSA), Ibrahim El-Zakzaky, leader of the Members of the Islamic Movement (IMN) as examples of such infractions.

He noted that Dasuki had been granted bail “on at least six different occasions” while the Buhari-led government “persistently refused to comply with the court orders.

He said El-Zakzaky has been in detention without trial for over three years despite calls to release him.

Approval of $1 billion for military expenditure

Abubakar said the federal government, through the National Economic Council (NEC), granted approval for the release of $1 billion from the excess crude account (ECA) for the procurement of military hardware and other equipment to fight insecurity in the country, in contravention of section 80 (3) and (4) of the 1999 constitution.

The PDP candidate also said the enactment of the Presidential Executive Order No. 006 as an executive legislation which permits security agencies to freeze the assets of persons standing trial or undergoing investigation is a trespass on legislative and judicial powers of the national assembly.