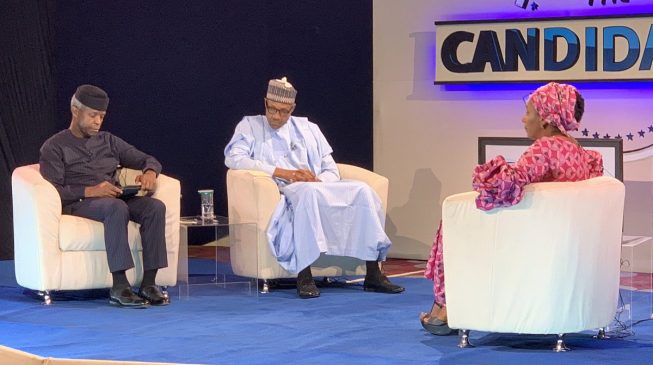 President Muhammadu Buhari made an indirect reference to the Code of Conduct Tribunal (CCT) case of Walter Onnoghen, chief justice of Nigeria (CJN), when he featured on The Candidates, a programme on the elections.

Presidential and vice-presidential candidates of four political parties contesting the elections will participate in the programme which kicked off with Buhari and Vice-President Yemi Osinbajo.

Kadaira Ahmed, executive director of Daria Media, the anchor, had asked Buhari to react to the allegations that the anti-corruption war is one-sided.

In his response, Buhari said: “Well, I think it’s unfair criticism. I don’t think there is anybody in this administration that has been pointed out as corrupt and we looked in the other direction.

“When I came in 1984, we arrested the president, vice-president and ministers. They were all under investigation for corruption. But this time around, it is different. People are not just arrested based on allegations. There are ongoing investigation.

“I decided to come now, and now I have to be careful because people are not just arrested like that. If they make the wrong declaration, and they are eventually uncovered, they face the court.”

Asked to clarify if he was referring to Onnoghen, Buhari stylishly avoided the question.

The Code of Conduct Bureau (CCB) had filed a six-count charge of false assets declaration against Onnoghen after a petition by the Anti-Corruption and Research Based Data Initiative (ARDI).

He was to be arraigned at the Code of Conduct Tribunal (CCT) on Monday but he failed to appear while the case was adjourned till January 22.

The federal government has asked the Nigerian Financial Intelligence Unit (NFIU) to freeze five bank accounts belonging to the CJN.

In a letter seen by TheCable, the office of the attorney-general of the federation said the restriction should be in place pending the determination of the case against Onnoghen at the .

The demand was based on the Presidential Executive order No. 6 enacted on July 5, 2018.

The national industrial court had restrained Danladi Umar, chairman of the tribunal, from going ahead to hear the case against the CJN pending the determination of a motion filed by one Peter Abang.

The Buhari administration has been under severe criticism since the report broke on Saturday.

The opposition Peoples Democratic Party (PDP) has accused the All Progressives Congress (APC)-led government of intimidating the judiciary ahead of the elections.