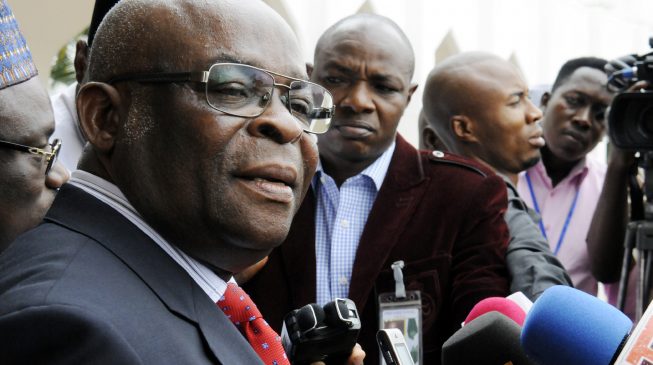 The Code of Conduct Tribunal has fixed Monday for the continuation of the non-assets declaration trial against Walter Onnoghen, chief justice of Nigeria (CJN).

Ibraheem Al-Hassan, spokesman of the tribunal, disclosed this in a statement issued on Thursday.

Al-Hassan said this was as a result of the appeal court ruling on the matter. Onnoghen had lost in his bid to make the appellate court halt his trial.

The Code of Conduct Bureau (CCB) which filed a six-count charge against the suspended CJN had asked the court to grant its prayer for the trial to continue and the court did.

“Following Court of Appeal ruling yesterday on the trial against Chief Justice of Nigeria, Hon. Justice Onnoghen Nkanu Walter, on alleged non declaration of asset before Code of Conduct Tribunal is hereby fixed for Monday, 4th of February, 2019,” he said.

“The decision was reached today sequel to a correspondent from Code of Conduct Bureau, applying for the resumption of trial of the case captioned; Application for resumption of trial of the case of FRN V. Hon. Justice Onnoghen Nkanu Walter Samuel case No: CCT/ABJ/01/19, addressed to Hon. Chairman Code of Conduct Tribunal, dated 30th January, 2019, jointly signed by Musa Ibrahim Usman (Esq) and Fatima Danjuma Ali (Esq).

“However, in the wake of this afternoon, 30th Junuary, 2019 the Court of Appeal has thrown out the appeal.

“Consequently on the above, we urge the Honourable Tribunal to give us a date for resumption of the trial subject to the convenience of the Tribunal, Most obliged my Lord.”