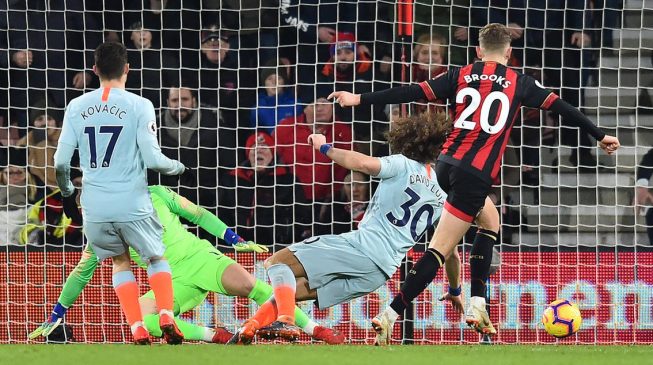 Chelsea suffered their biggest defeat of the season with a 0-4 humiliation at Bournemouth while Liverpool failed to fully capitalise on Man City’s loss, only managing a 1-1 draw at Anfield to go five points clear.

Gonzalo Higuain made his first Premier League start for Chelsea but the Argentine striker failed to have a shot on target in his 65-minute baptism in the EPL.

Chelsea capitulated in a poor second period, conceding four goals after a goalless first half.

Joshua King started the rout two minutes after the restart, the Norway international latching on to David Brooks’ through ball to slot beyond Chelsea goalkeeper, Kepa Arizabalaga, who was rooted to the spot.

The impressive Brooks scored the second goal after the hour mark, after capitalising on a David Luiz error.

The Brazilian defender’s poor pass out of defence was intercepted and King freed 21-year-old Brooks who shifted the ball beyond Luiz before slotting to the bottom corner.

The Cherries went for the kill and got their reward 10 minutes later. Error-prone Luiz failed to cut out a through ball from midfield which Junior Stanislas pounced on and squared for King to complete his brace.

Chelsea looked a shadow of their usual self and Bournemouth completed the rout in added time, Charlie Daniels’ header from Jordan Ibe’s cross finding the top corner.

The defeat further dents Chelsea’s top-four ambition, with the team now level on points with fifth-place Arsenal while Man United are only two points behind.

Liverpool, on the other hand, managed a 1-1 draw as they failed to fully capitalise on Man City’s slip up at Newcastle.

Needing a win to go seven points clear at the top of the log, the Reds made the best possible start by taking the lead on three minutes through Saido Mane who curled in a low shot from inside the penalty area, his 11th goal of the season.

Harry Maguire equalised for Leicester to put the brakes on Liverpool’s party.

A dour second half saw Jurgen Klopp’s men unable to break down the Foxes who earned a respectable draw- their first point in three games- as Liverpool continue to navigate their way to a first EPL title since its inception, and their first premier division league title since 1990.