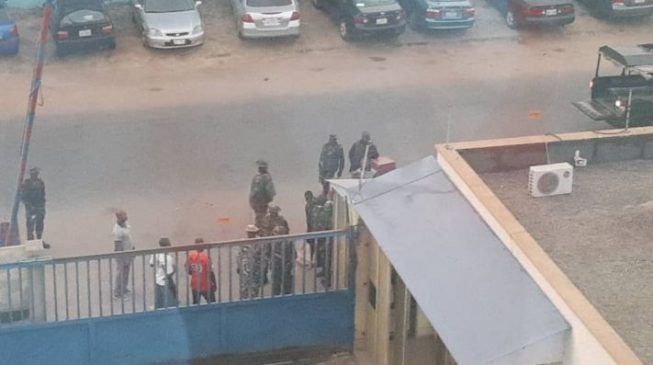 Soldiers on Sunday invaded the head office of Daily Trust newspaper in Abuja and its regional office in Maiduguri, Borno state capital.

The reason for the invasion is yet to be known, but the armed soldiers arrested Uthman Abubakar, the newspaper’s regional editor, and Ibrahim Sawab, a reporter.

The soldiers barricaded the gate of the regional office, after arresting the two editorial staff.

Hours after shutting down the Maiduguri office, another set of soldiers invaded the head office, carting away computers and ordering all members of staff to leave the newsroom.

The editor’s byline appeared on the newspaper’s Sunday lead story about the military operation in the north-east.

When TheCable reached out to Sani Usman over the development, the army spokesman said he will “find out” what is going on.

Following the invasion, Daily Trust took its social media pages to demand the release of its members of staff.

The whereabouts of Daily Trust staff arrested in its Maiduguri office in Borno state remained unknown after armed Nigerian security agents stormed the office and shut it down on Sunday.

73 people are talking about this