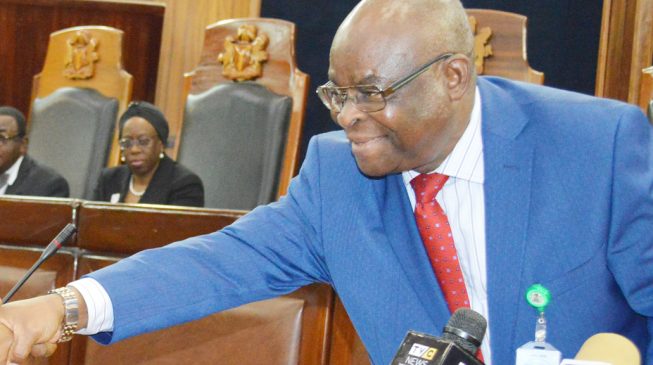 Ahead of the emergency meeting of the National Judicial Council (NJC) on Tuesday, the office of the attorney-general of the federation (AGF) has sent a list of criminal allegations against Water Onnoghen to the body, TheCable can report.
Insiders at the ministry of justice informed TheCable that the petition contains a number of damaging allegations against the chief justice of Nigeria (CJN), including bank statements and title deeds of properties said to have been traced to him.
The figures involved are said to be in billions of naira and several millions of dollars — as well as dozens of houses.
“The Code of Conduct Bureau (CCB) did not file these criminal allegations against the CJN at the Code of Conduct Tribunal (CCT) because it is a separate issue from non-declaration of assets,” a senior official of the ministry told TheCable.
“There have been questions about the legality of Onnoghen’s suspension by the president,but section 11 of the interpretations act states clearly that he who has the power to appoint also has the power to discipline. We are convinced the president acted within the laws of the land.
“Nevertheless, the more serious criminal allegations have now been fully investigated. These allegations point to unexplained wealth. The entire bundle has been sent to the NJC so that the body can do its job and allow Onnoghen to face criminal prosecution. That is a completely different matter from the case of non-declaration of assets before the CCT.”
The CCT adjourned indefinitely on Monday, saying it was obeying an order of the court of appeal.
TheCable earlier reported that members of NJC have summoned an emergency meetingfor Tuesday to discuss the crisis that has hit the judiciary following the suspension of Onnoghen and the appointment of Ibrahim Mohammad as the acting CJN — two presidential actions that have become a subject of controversy and litigation.
Neither Onnoghen nor Muhammad will preside over the NJC meeting, sources told TheCable, with strong indications that the body would act decisively to put the controversy to rest.
WHAT DO NJC RULES SAY?
According to the rules guiding the conduct of NJC meetings, five or more members can summon a meeting subject to a request made to the chairman.
TheCable was unable to confirm if this requirement was met.
The rules state that:
WHO ARE NJC MEMBERS?
According to 1999 constitution, members of the council are:
WHAT ARE THE POWERS AND DUTIES OF NJC?
The constitution says the NJC shall have power to, among other things: