EXTRA: Even Atiku knows that his money will be safe with Buhari, says Osinbajo 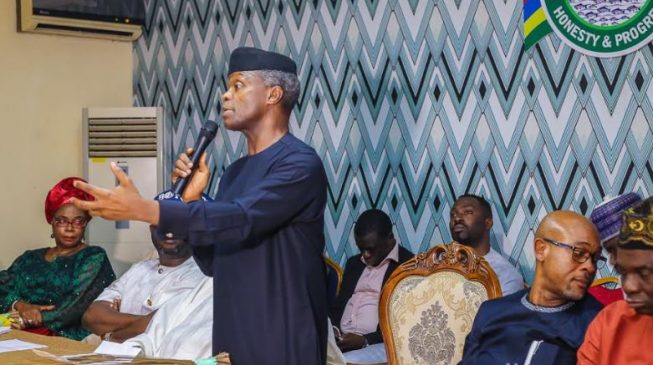 Osinbajo stated this while addressing the `Drive 4 Buhari-Osinbajo’ rally organised by the ‘I am Ready’ campaign group alongside other support groups on Tuesday in Abuja.

Referring to an earlier remark by governor Yahaya Bello of Kogi, Osinbajo said Nigeria’s wealth is safe with Buhari.

The vice-president said: “We will not allow them to come back. I think that the very right question has been asked; where will you rather put your money?

“Even the enemies will put their money in his bank because they know that their money will be safe in his bank; we have today an honest man as president, a man who will use the money for what it is meant.

“Even his worst enemy knows that he is an honest man and that he will use the money. I pray for our country that our country will be great.

“Even Atiku knows that Buhari is an honest man; and he can never deny that; nobody can deny that; that is the kind of leader we want for our country today.”

Osinbajo said that the Buhari-led administration had made giant strides in the last three years.