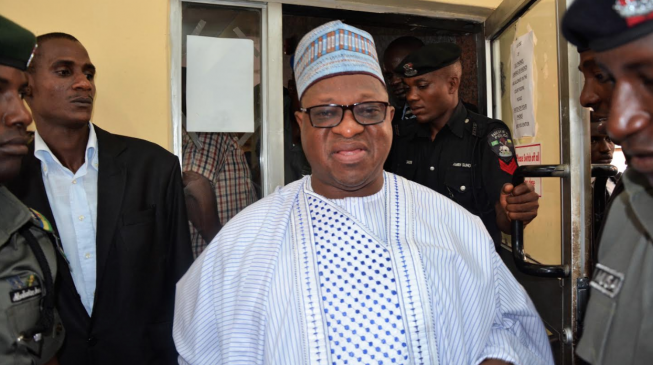 At 11:39 on January 2, a Twitter handle, @LadiSpeaks posted a tweet claiming that Joshua Dariye,  convicted former governor of Plateau state, made donations to the Buhari Campaign Organisation.

“It Seems APC members are trying to outdo themselves on who donates more buses to Buhari’s Campaign.”

@LadiSpeaks is a verified Twitter account with the name: African giant-Ladi. In his Twitter bio, he described himself as the publisher of @PidginBlogNG, and a Google Digital skills trainer. The account has over 62,500 followers.

@ladiSpeaks did not provide any pictorial evidence of the buses donated by Dariye or provide a link to a credible newspaper with the report.

The Centre for Democracy and Development (CDD) reached out to @LadiSpeaks for pictorial and other proof of the alleged donation but he had not responded as of the time of this publication.

CDD asked the Buhari Campaign Organisation (BCO) if it received any donation from Dariye. Festus Keyamo, the director of media and publicity of BCO, said he was unaware if the alleged donation was made. He could neither confirm nor deny if any donation was received from the ex-governor.

Israel Ibeleme, a spokesperson for Rotimi Amaechi, director-general of BCO, denied receiving any donation from Dariye.

“I have spoken to the DG, he said no donation was received from Dariye. It is fake news,” he said during a telephone chat.

CDD also spoke to the spokesperson to the APC in Plateau, Chindo Dafat, who said he was not aware that any donation was made to the Buhari campaign by Dariye.

“I have contacted about three people who are close to the family and none of them confirmed to me the story. They are telling me that they are not aware of the news. I think it’s fake. Those I contacted are serious people but none could confirm it is true,” he said.

Though CDD cannot independently verify the claims of those it spoke to, coupled with the reluctance of the original publisher of the tweet to provide evidence of the alleged donations, our verdict of the news of the donation is LIKELY FALSE.

In June, Dariye was convicted of money laundering related offences and sentenced to 14 years’ imprisonment (which was later reduced to 10 years by the Appeal Court). Since his conviction, there have been speculations over his involvement in politics.

So, what is the likely motive behind the news of the alleged donation?

Since the commencement of the campaign toward the forthcoming general election, governors and other politicians in the APC have been making donations to the re-election campaign. In December Abdulmumin Jibrin, the house of representative member representing Kano municipal constituency, tweeted that he was donating 150 vehicles for the 2019 campaign of Buhari, Abdullahi Ganduje, governor of Kano state and the APC.

Rotimi Akeredolu, governor of Ondo state, had announced the donation of buses to the re-election campaign of President Buhari and Vice President Yemi Osinbajo.

In November, the Daily Trust newspaper reported that Dariye, who is the senator representing Plateau Central senatorial district, made a plea to his supporters from jail to vote for Buhari and Simon Lalong, the incumbent governor.

Later it was widely reported that he had procured a nomination form for re-election to represent Plateau central but his party, the APC, denied it.

Beware of Fake News. Don’t Peddle it! Don’t Spread it!

This report was produced by the fake news project of the Centre for Democracy and Development (CDD), an independent and non-partisan organisation, seeking to counter electoral misinformation and promote peaceful elections.