Falana: No court can stop prosecution before CCT 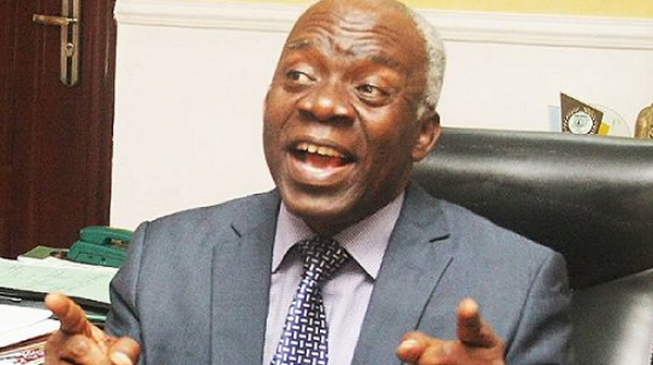 Femi Falana, human rights lawyer, says no court has the right to stop a trial at the Code of Conduct Tribunal (CCT).

He said this in reaction to the suspension of Walter Onnoghen, former chief justice of Nigeria (CJN) by President Muhammadu Buhari.

Buhari had backed his action with a CCT order even though different courts ruled that the matter be put on hold.

Speaking during a Channels TV programme, Falana said the National Industrial Court and the appeal court could not have halted the trial

“There’s no way any court anywhere can stop the prosecution before the Code of Conduct Tribunal, because my lord the Honourable Justice Onnoghen had said in the case of Saraki and the Federal Republic of Nigeria that the code of Conduct Tribunal is the only forum exclusively empowered to deal with breaches of code of conduct of public officers,” he said.

“So you can’t go to a national industrial court or a customary court of appeal or the federal high court which has no jurisdiction on allegations of breaches of the code of conduct. No!

“No court, not even the supreme court, can order somebody occupying an office–I’m not even talking about the chief justice now–to vacate ex parte, because you have already determined his rights and obligations in his absence. You can ask for an injunction to say somebody should not assume office because somebody else is occupying the office. But you cannot on an ex parte basis remove somebody from office and then ask somebody to take his place. It’s not possible.”

The senior advocate of Nigeria (SAN) asked  government to operateunder the law,” adding that Nigerians should be “prepared to defend this “democratic republic”.

“We must learn to operate under the rule of law. You now play into the hands of a regime that was determined to embarrass the country as it were by putting the chief justice on suspension. That is what has happened,” he said

“The president talks of the alacrity with which court orders were being procured. Of course the filing of the charge within 48 hours can also be said to have been done with alacrity.

“I have warned that Nigerians have to be prepared to defend this rickety democratic republic. I have warned against our deference to fascism and I’m not talking of the APC alone.”